The NFL recently announced that Nike would replace Reebok as the official uniform provider in 2012, and New Era will supply sideline caps.  Reebok will finish out its deal next season.

Within weeks, some knucklehead with a computer created drawings of the "Nike Pro Combat Uniform Designs," and stuck 'em in the internet tubes.  The poster there said they were the designs for the 2012 NFL season, but 'not official.'

Let's hope not.  The uniform for the Buccaneers brings back Bucco Bruce, but even more boring: 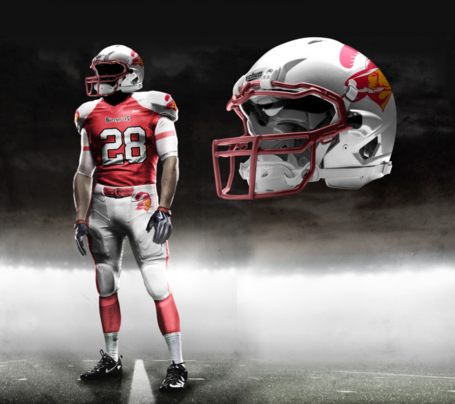 It could be worse.  Take a look at the proposed uniforms of the Kansas City Chiefs.  Hideous.

Other teams are radically different, too, such as the Patriots and the Bengals.

But not to worry.  Friday, NFL public relations shot down the idea of those being official jerseys:

just to clarify, the artist renderings of NFL uniforms floating around ARE NOT from the league or Nike. stand down