Let Us Know How That (Eventually) Works Out For You

Share All sharing options for: Let Us Know How That (Eventually) Works Out For You

So Pat  "The dripping-with-sarcasm Bat" Burrell is hitting (as of this writing) .355 in the nine games he's played in for the San Francisco Giants.  I know what you're thinking.

But don't worry; it won't last.

Burrell has never hit higher than .282 over a full season in his career, and that was way back in 2002.

To be sure, if he hits .222 with 15 homers (and ANYTHING AT ALL off of lefties), that's still better than what he produced during his time in Tampa Bay.

But you know what?  That's just fine, too.

Regardless of 1) the numbers he produces for the Giants, 2) what numbers Hank Blaylock doesn't produce for the Rays, and 3) how much money the whole thing ends up costing the Rays, 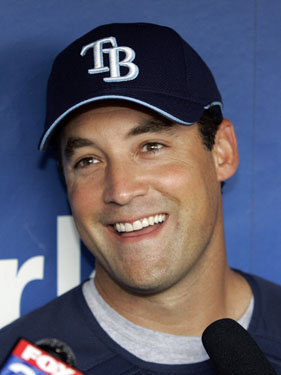 nobody should be muttering about 'what a bunch of boobs Andrew Friedman and Stewart Sternberg and Joe Maddon are' and 'what a stupid move it was to to let Burrell go.'

Management had been as patient as they possibly could, waiting for him to do... well, anything.

Animosity from the fans was so high he could have hit .755 over a nine game stretch and not gotten them back in his corner.

He was never going to produce the way we needed him to, the way he was PAID to do, while he was with the Rays. It just wasn't going to happen. Nope, this was a relationship that had to end exactly the way it did, no matter what Burrell does the rest of the season.

And when the rubber meets the road, I still believe it won't be much.