Allison brought the big signs, nametags, T-shirts and other sorts of swag.

Oh, and a couple of bottles of Crown Royal Black.

Someone once said "For every king, a Crown," but on this evening, it was "For every editor, a bottle of Crown Royal Black." We'll get to that in a minute.

As always, the wait staff at the TBBrewCo was serving great food, 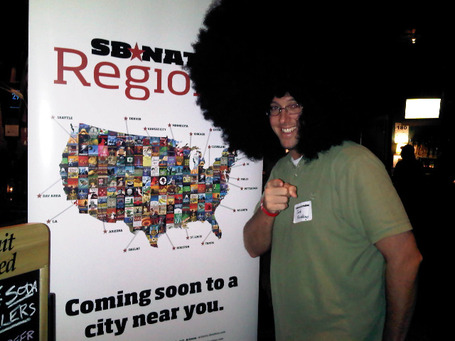 while the bartenders kept the beer flowing and glasses of full of free Crown Royal and your choice of mixer.

Sports fans from all over the state showed up, some from as far as Gainesville. Sports Chump Chris Humphries was there wearing a SportsChump.net shirt and pimping his website.

Michael Sarage was there representing the St. Pete Times Forum and the local hockey team, as was local blogger, and self-proclaimed Creative Genius, Jordi Scrubbings.

SB Nation was well represented. The guys from Buc'em were enjoying beverages, including writers Paul and Lee, and editor Craig T.  By the way, Craig tells me there are big changes coming to Buc'Em soon. Stay tuned for that.

SB Nation Tampa Bay writer Clark Brooks joined us and brought along a few friends. We already mentioned Allison from SB Nation's marketing team, which reminds me again of the cool swag we got.

Within Allison's bag of tricks were a couple bottles of Crown Royal Black.  They came in the same ol' CR bag you have holding your change, or your contacts case, or whatever other paraphenalia you need to keep in a bag. Except these were black and personalized.  Check out the one I got: 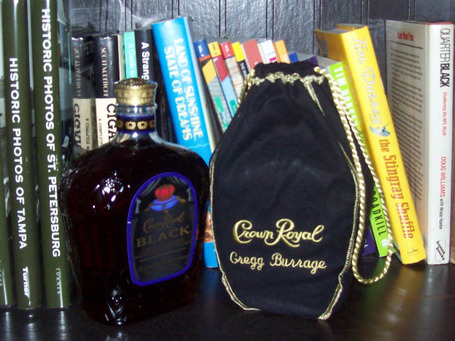 Overall, it was a great time at the Tampa Bay Brewing Company.  We'd like to thank them as well as the great folks at Crown Royal for the party to launch SB Nation Tampa Bay.