Enemies Of The Week Nomination: Derek And Jeff

Share All sharing options for: Enemies Of The Week Nomination: Derek And Jeff

Kindergarteners Derek and Jeff drove down from Pittsburgh to play in Tampa Bay. 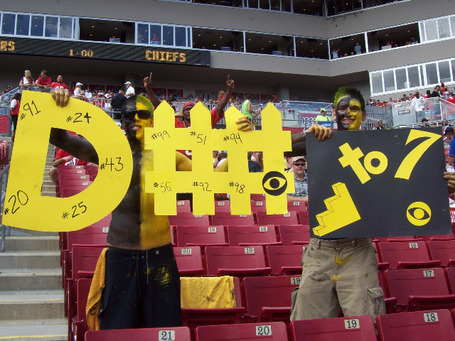 They wore no shirts to show off their fascination with fingerpaints (and hairpaint and face paint and who-knows-what-else paint).

They also showed their expertise in working with construction paper.  In addition to the tried-and-true "D Fence," a play on words with a modern song from 1977, and sucking up to the network who showed the game (in some markets), someone reported seeing a paper doll.  I think it was of Troy Polamalu.

Since Heat Miser was doing his thing, puddles of yellow & black sweat formed around these two, covering the seats and forcing their neighbors to move away.

See those yellow towels?  They didn't bring them along to clean up their disgusting mess.

Apparently, on the trip from Pittsburgh, they ran out of gas, and they used them in an attempt to flag down passersby to thelp them out.  Being Steelers fans, no one helped them out. But they waved those rags so much they couldn't stop even when they reached Raymond James Stadium.  They stood up at various times throughout the game, waving these things around still hoping someone would come to their rescue.

They were ignored, and by the start of the fourth quarter, Bucs fans nearby had simply left them there to melt in the sun.

It is not known if they made it back to Pittsburgh, or if they are still there trying to flag someone down.

We're alwlays looking for Tampa Bay's most outrageous, outspoken, excitable, enthusiastic fans.  If you see anyone who fits the description, snap a photo, tell us what makes them such a great fan of our local teams, and send it to us at TampaBay@sbnation.com.