The Steelers may have the better record and the blessings of advanced stats, but maychance Jags have a surprise in the making.

Few analysts or fans expected the Pittsburgh Steelers to start the season with a 35-7 loss to the Baltimore Ravens -- and less still anticipated them to fall to the Houston Texans in Week 4 -- but here they stand, 3-2 and just a 2 wins ahead of the 1-4 Jacksonville Jaguars.

A gap of two wins may not seem like much -- a missed field goal in Indiana, and the Steelers would possibly lead by only a single game. And besides, what is the difference between a 10-6 or 12-4 team --  or a 4-12 and 6-10 team? Not much, but there is indeed a huge difference between these two teams.

The site Football Outsiders maintains a statistic called DVOA -- or Defense-adjusted Value Over Average, a complex, yet intuitive statistic that attempts to weight outcomes according to their significance. (Such as: Usually, all else equal, 10 yards is more important than 2 yards -- unless we gain 10 yards on 3rd and 20 or gain 2 yards on 4th and goal on the 2 yard line.)

Using DVOA, Football Outsiders is able to rank teams according to their overall efficiency and rate how good or bad they are with respect to the rest of the league. The gap between the Steelers and Jags, unfortunately, is much bigger than the average two-game gap: 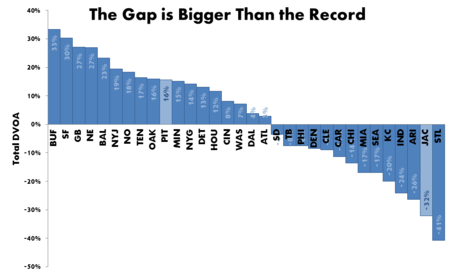 The Jaguars are a whopping 4 games behind the Detroit Lions (5-0), but the Jags have a DVAO total team efficiency 3% closer to Motown than Steeltown.

The San Diego Chargers (4-1) are three games ahead of Jacksonville, but actually have a negative overall team rating (likely due in part to their favorable schedule thus far).

Fortunately, the greatest difference between the Jaguars and Steelers is the one biggest hopes for improvement in the coming weeks: 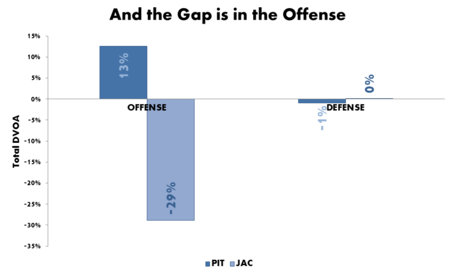 NOTE: Negative DVOAs on defense are a good thing.

Yes, the Jaguars offense -- thus far rather abysmal -- has been a, if not the, key difference between these two teams statistically. And thankfully for the Jaguars, DVOA is not terribly predictive. With Blaine Gabbert improving each week and Maurice Jones-Drew ever a threat to dominate a game, the Jags actually may surprise the Steelers this week.

Yes, I am calling for an upset. If the Jags commit to Jones-Drew, they should easily find success against a team that has thus far shown little ability to stop runners (29th worst rush defense according to DVOA). This may create some legitimate play-action opportunities for Blaine Gabbert, who seems to be finally building the begininings of a rapport with wide-out Mike Thomas.

That being said, if the Jags fall down early, we can full expect the Steelers to run away with the game. Gabbert -- behind the Japanese paper door we call the Jags O-line -- stands little chance of keeping the game close in a slug-fest.

Look for the Jags to run early, late, and well -- or look for more suffering in the advanced stats spreadsheets.