Share All sharing options for: We Didn't Even Make It To Halloween Before The First Insulting Vinny Lecavalier Trade Rumor Of The Season

And surprise, it's not a Montreal media outlet firing the first shot of silly string! No, it's The Province, based out of Vancouver, which is very concerned that last season's Stanley Cup Final might have permanently broken Roberto Luongo's brain. He's got a huge contract, so the Canucks can't just turn him loose. But who could he possibly be traded for? Ah, of course!

Many people say the Canucks made a huge mistake in signing Lou to a 12-year, $64-million no-trade contract in 2009 because it makes parting with him impossible. So here's our solution.

Trade Luongo straight up for Vincent Lecavalier of the Tampa Bay Lightning, who has a similar, $85-million, 11-year no-trade deal. With Steve Stamkos in Tampa, Lecavalier is no longer top dog and could use a fresh start as much as Lou.

Tampa needs better goaltending; we need a power forward. Lou's wife could finally be closer to her family, and Lecavalier could play hockey again in a city that actually cares about his sport.

First of all, I'm sure the Canucks would appreciate the fact that this ludicrous trade adds almost $2.5 million per year to their salary cap figure. Then I'm sure they would enjoy trying to find a place for Lecavalier to play, since as Yahoo Sports's Puck Daddy correctly points out, center is clearly not a need position. They're certainly not going to move Henrik Sedin or Ryan Kesler off their top two lines. Meanwhile, Lecavalier sure as hell doesn't need a fresh start just because he's not a 100-point player anymore. Vinny is entrenched in Tampa; he's the team's captain, this is his 13th season with the Lightning, he has a family here and a wing of All Children's Hospital named after him... and he's survived trade rumors that were much more legitimate and realistic than, "Oh, let's dump our wobbly expensive goalie on Tampa two weeks into the season! They're too dumb to care!"

And about that "cares about his sport" nonsense...

HEY VANCOUVER, WE DON'T ALLOW IDIOTS TO TRY AND BURN OUR FREAKING CITY DOWN WHEN OUR HOCKEY TEAM LOSES GAME 7 OF THE STANLEY CUP FINAL, LIKE YOU HAVE DONE ON TWO SEPARATE OCCASIONS.

OH WAIT, WHAT AM I EVEN TALKING ABOUT? THE LIGHTNING WON THEIR GAME 7 OF THE STANLEY CUP FINAL. TAMPA BAY HAS A STANLEY CUP BANNER. YOU DO NOT. SORRY ABOUT THAT. ACTUALLY NO. NOT SORRY AT ALL. 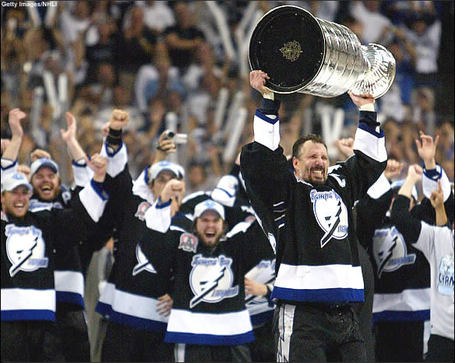