Share All sharing options for: 2011 Gold Gloves: Were The Tampa Bay Rays Snubbed?

The MLB officially announced its decisions for the 2011 Gold Glove winners, and -- sadly -- no members of the Tampa Bay Rays were among them. Handing out AL Gold Gloves to five different first-time winners, the MLB had previously announced that three different Rays fielders had made the penultimate cut: 3B Evan Longoria (one previous Gold Glove), 1B Casey Kotchman (also a previous winner), and LF Sam Fuld (doesn't have a GG, but he does have a cape).

As painful as it is to see members of the Rangers (beat the Rays in the 2011 and 2010 ALDS), the Red Sox (hated Rays rival), and Royals (a comparatively low-talent team) win the prestigious award, it's important to first investigate the merits of their success.

Perhaps the single-most advanced, comprehensive fielding statistic available right now is Ultimate Zone Rating, or UZR. Unlike fielding percentage, UZR takes into account a player's range, the difficulty of their position, and a multitude of other, equally intuitive fielding facets that traditional stats ignore.

And, somewhat surprisingly, UZR appears to agree with the GG voters when it comes to the Rays' finalists: 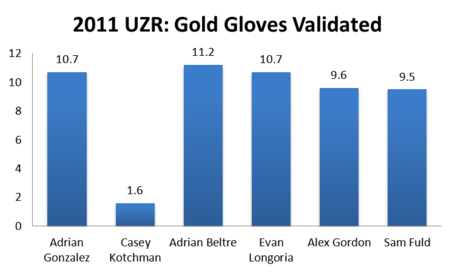 NOTE: UZR totals show the average amount of runs a player has saved over the league average defender. In other words, Sam Fuld made plays that in most contexts would have save 9.5 runs more than Joe Fielder this year.

One of the problems with UZR is that -- because of its great complexity -- subtle errors in the data collection can sometimes skew a single season of data (see: Casey Kotchman's suspicious 1.6 runs saved). As such, the rule of thumb is to look at three years of UZR data, rather than just a single season, to establish how truly good a player's fielding ability is -- their fielding true talent level.

If we cull together these player's 3-Year UZRs (from 2009 through 2011), we suddenly have six players with quite different amounts of playing time. This throws UZR for a bit of a loop, so instead we turn to their UZR rates -- or UZR/150 -- which prorates their actual UZR over 150 games. This let's us see how good the player would have been over a full season, assuming they continued to play at that level (a sometimes dangerous assumption).

Looking at UZR/150, we again (surprisingly) get similar results: 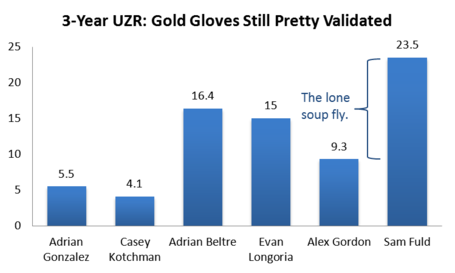 The only fly in the soup here is outfielder Sam Fuld, who has just a little over a third of the playing time Alex Gordon does. In other words, Fuld, whose been a September call-up and a fourth outfielder for most of his career, has only a fraction of the data Gordon has on him.

Does that mean Fuld would ultimately be a worse defender? Honestly, I think not. Fuld made some simply amazing plays with the Rays in 2011, but he also made more mistakes as the season progressed. I imagine if Fuld was given consistent playing time, he would ultimately have a much lower UZR/150, but he would still grade out slightly-to-noticeably better than the Royals Alex Gordon.

Conclusion: The only Rays finalist seemingly snubbed was -- much to my surprise -- Sam Fuld. The Legend grows, so it would seem.