Share All sharing options for: Minnesota Twins And Tampa Bay Rays: Snowed Out?

The forecast is cold and gloomy in Minnesota.

The Tampa Bay Rays are set to begin a three game series at the Minnesota Twins, putting Wade Davis on the mound against the veteran Francisco Liriano in Game 1, but the weather may have other plans: 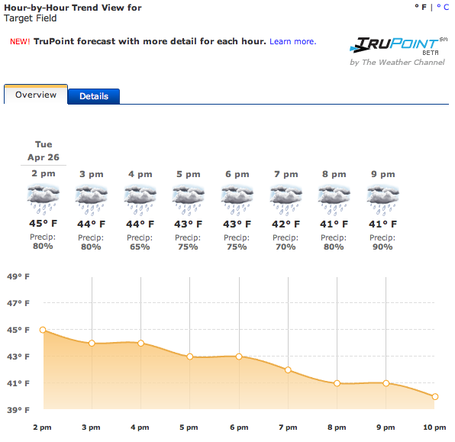 Tomorrow is much of the same, with the chance of precipitation at 68%. In fact, the field may not be playable until Thursday! 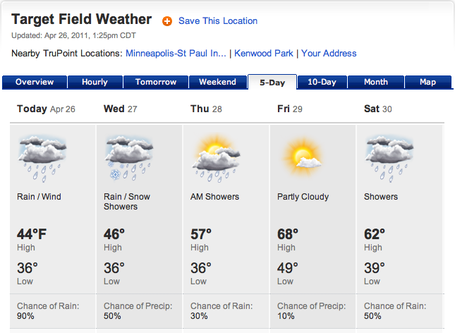 Luckily, as noted by St. Pete Times's Marc Topkin, the games could be made up.

The Rays are scheduled for three games this trip, with the finale on Thursday afternoon, but any rain-outs could be made up when they come back in July, with a July 4 matinee, a night game July 5 and another matinee on July 6.

It is unfortunate that the two teams will have to wait so long. The Rays took three of four games last week at the Trop and were hoping to continue their recent dominance at Target Field. The game has been called, and it's hard to believe anyone would want to take the field tomorrow either.