After losing last night to the Los Angeles Angels 8-5, the Tampa Bay Rays send James Shields to the mound today against Joel Pineiro for the Angels. The Rays were sleep-deprived in yesterday's game, not getting to sleep until 5 AM after traveling all night due to the doubleheader with the Twins, but should be well rested for today's game.

James Shields (2.35 ERA, 3.40 FIP) has been on fire recently, pitching two complete games in his most recent two starts. He's been looking like an entirely different pitcher from last season, when he allowed the most hits in the majors and second-most homeruns, and he's mixing in his curveball and changeup much more frequently while using his fastballs less often.

Joel Pineiro is making his first start of the season, after missing the month of April with a shoulder injury. His is a sinkerball pitcher that thrives by making batters pound the ball into the ground, so the Rays will try to counter that by stacking their lineup primarily with flyball hitters.

Here's the Rays' lineup for today, courtesy of J.B. Long from the Bright House Sports Network: 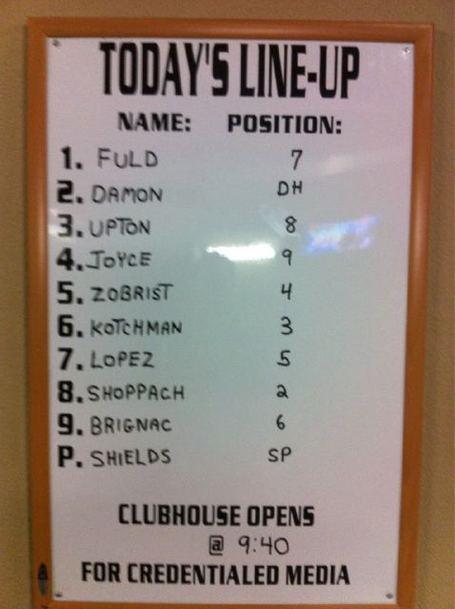 After the game, the Rays are hosting their first concert in their Summer Concert Series, with REO Speedwagon coming to the Trop.