The Rays need a win today to avoid losing their fourth series in a row, but who cares about that; let's focus on the real story today: Super Sam Fuld Day.

After Manny Ramirez's sudden retirement early this season, the Rays needed to find another promotion to fill their May 29th "Manny Ramirez Bobblehead Day" slot. Shortly afterward, Sam Fuld catapulted himself into the realm of Legends, and the decision was made: today would become a Super Sam Fuld cape giveaway.

Even though Sam Fuld has cooled off since his hot start (.227 BA), as the St. Pete Times points out this weekend, there are still plenty of reasons beyond the ballpark and stats to consider Sam Fuld super. He's a heck of a person and a great role model, and many of the Rays are getting into the fun as well: 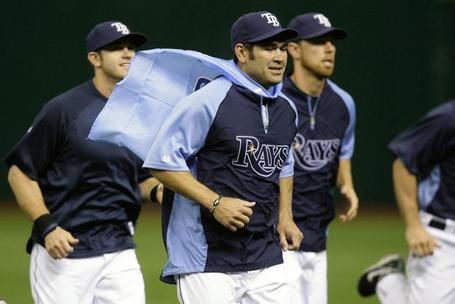 Today's pitching matchup is Jeremy Hellickson (4.01 FIP) vs Justin Masterson (2.98 FIP). Masterson is a right-handed groundball pitcher, and the Rays have had struggles against groundball pitchers so far this year (.603 OPS). That's no saying they'll struggle today as well, but it's something to keep in mind.

After getting a couple hits yesterday, including a homerun, Evan Longoria is back in the leadoff spot today. Hey, whatever works; technically, having Longoria higher in the lineup will get him more plate appearances, so it's not a bad move even if it is unorthodox.

Today's full lineup for the Rays (from DRaysBay and JB Long):