The Rays have need clutch fielding, clutch running, and even clutch hitting from Ben Zobrist, their first half MVP.

Baseball breaks into four basic elements: Pitching, hitting, fielding, and base running. There are more deviations within and around these four elements, but these four are the most important. For the Rays, we can safely propose the pitching MVP has been none other than All-Star James Shields, while their hitting MVP was arguably and surprisingly Casey Kotchman.

That leaves defense, base running, and an overall MVP. And frankly, Ben Zobrist is all three.

Fielding
The Rays love their fielders. Cheap, elite defenders helped lift the Rays from obscurity to AL champions in 2008, and the Rays front office has continued that pattern ever since. Ben Zobrist, who initially came to the Rays as a shortstop in the Aubrey Huff deal, has since mastered second base and right field, while also offering above average defensive ability in center, left, first, and third.

Statistics like fielding percentage do a woefully insufficient job of measuring defenders like Zobrist. First of all, it treats the positions the same: Suggesting first base is as difficult as catcher or shortstop (which it most certainly is not). Moreover, it relies heavily on the scorer's opinion and sometimes even the context of the game.

Advanced statistics like Ultimate Zone Rating (UZR) and Defensive Runs Saved (DRS) all rave about Ben Zobrist. He possesses a rare combination of excellent range and fielding skills that have made him the sixth most valuable defender so for in 2011, much less the best defender on the team this first half.

Base Running
Ben Zobrist has never stolen more than 25 bases in a single season, but he is consistently a great base runner. This year, he has been phenomenal. Base running is and always has been about more than just stealing bases. Runners need to be quick, but they also need to be precise. Smart runners get caught stealing less, and they move to third from first or from second to home on singles.

The site FanGraphs has a statistic called Bsr, or base running runs above average, which tries to capture all the non-stolen base runs added by a runner. According to Bsr, Ben Zobrist is having a career year on the base paths, having already added 3 runs -- good enough for 10th best in the league. Yeah, B.J. Upton has 21 steals this year, but he also has 7 caught stealing to Zobrist's 2.

Overall
Put his defensive prowess and flexibility in with his great base running and improved hitting, Zobrist has been undeniably the keystone to the Rays early success. Sporting a strong .269/.355/.474 slash with 10 homers in a year where pitchers are again dominating, Zorilla even puts himself in contention for the Rays hitting MVP.

Ben Zobrist may or may not maintain his strong hitting and excellent base running, but his defense will no doubt continue to support the team late into the season. Here's hoping he can do well enough to earn league MVP consideration. 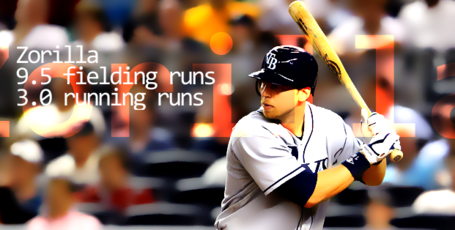