By now you have probably all seen the way that the 19 inning Atlanta Braves, Pittsburgh Pirates marathon ended early this morning. Home plate Umpire Jerry Meals made possibly one of the worst calls I've ever seen at home plate, calling Julio Lugo safe despite an apparent tag to his leg on a ball that beat him by six feet to the plate. Some are saying that perhaps the gloves missed him by a fraction of an inch and that Meals was the only one in the world who could tell, but come on...really? Dude was out and Meals wanted to go home after umpiring nineteen innings.

For Rays fans, this sort of things comes from no surprise from Meals, as skipper Joe Maddon has had his run ins with Meals in the past. 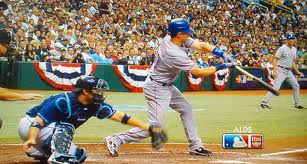 Flashback to the 2010 ALDS against Texas. In game two, Michael Young took a swing at strike 3 in the dirt but the appeal down to the first base umpire ruled it a check swing and Young was able to stay alive, hitting the next pitch out of the ballpark for a momentum killing three run bomb. The Rays would go on to lose the series in five games, mostly because of Cliff Lee.

The first base umpire that game.... Jerry Meals. 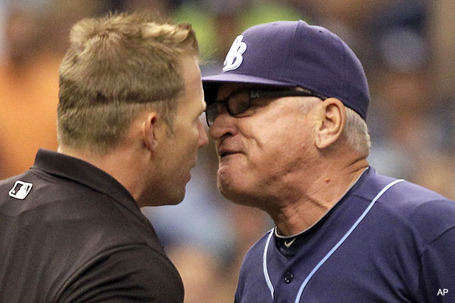 Why is okay for baseball to continually allow people other than the nine men on the field to determine the outcome of games? The human element is the players wearing the jerseys, not the men in black. Robot Umpires, please.