The Tampa Bay Rays returned from a four-run ninth-inning deficit to stun the Kansas City Royals 8-7.

Today's lineup began with a new lead-off hitter: Matt Joyce. A heavy bat with plus-plus speed, he is an upgrade over tonight's left fielder, the speedy Sam Fuld. Maddon decided to give it a try, and both proved instrumental in tonight's game. Joyce went 3-for-5 with a home run and two runs scored, while Fuld went got on base in all five plate appearances (two hits, three walks), also scoring a run and driving one in on the eventual game-winning play.

Joyce led the bottom of the ninth with a single and Johnny Damon followed suit before the Royals brought Joakim Soria in for the save. With no outs Evan Longoria doubled into the left field gap to plate Joyce. Ben Zobrist then moved the runners and scored Damon on a ground out to bring the Rays in reach at 7-5.

Next, the magical Casey Kotchman "singled" Longoria home on a failed scoop at first base, cutting the deficit to 7-6. With pressure mounting, Upton struck out on three pitches. With two outs, the Legendary Sam Fuld tripled off the right field wall, the ball arcing in to the perfect slot in the gap and somehow getting over the head of Jeff Francoeur. Kotchman's pinch runner scored and the relay to third skipped away while Fuld slid into the bag.

Taking advantage of the error, Fuld slid face first again - this time into home plate to beat the throw and score the winning run. The Rays cleared the bench for a dogpile on Fuld after the thrilling comeback win. 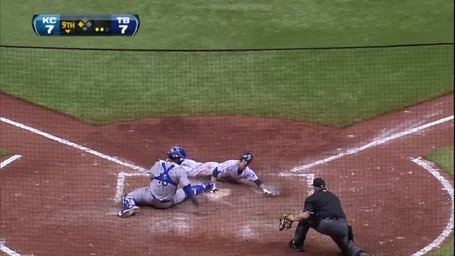 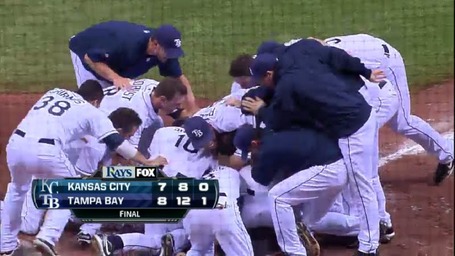 Rays Vs. Royals: Rays Get First Series Sweep Since June