Five Keys To The Jaguars-Titans Game

Share All sharing options for: Five Keys To The Jaguars-Titans Game

Matt Hasselbeck and the Tennessee Titans head to Jacksonville this Sunday to take on the Jacksonville Jaguars. If the Jags want to come away with a win -- and, more importantly, if they want to start the season right -- they will need to perform well on these five key elements:

1) Protect Luke McCown.
The Jaguars have not really had the worst pass protection lately, but they are near the worst. Last season, the Jags allowed 17% more sacks per pass attempt than the league average. That's not good -- and it made life difficult for David Garrard (who, in all fairness produced a number of sacks on his own): 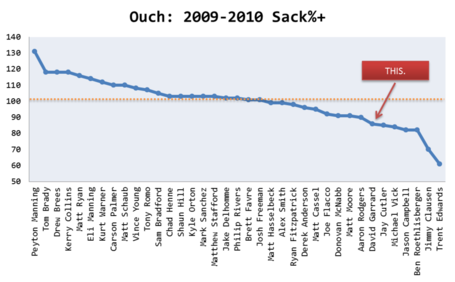 Since 2009, the Jaguars have never had an above-average pass protection. As a part-result, Garrard seemed to always underplay his potential. If McCown (or Blaine Gabbert) intend to lead a successful season, they will need at least average pass protection to make up for the shortcomings elsewhere (specifically, in the WR corps and in their own lack of experience).

The Titans will hopefully make this task easier in Week 1 as some of their top pass rushers recover from injuries.

2) Stop the Chris Johnson
The Titans' top running back, sensation Chris Johnson, can and will take over games at will. He led the league in 2009 when he rushed for 2006 yards and managed over 125 yards rushing per game, but regressed in 2010, rushing for 1354 yards and a tick over 85 per game.

According to Football Outsiders, the Jaguars had the single worst defense in the league and the 4th worst rush defense. New personnel on the front line (Tyson Alualu) and the linebacking group (Clint Session) will hopefully provide a sufficient roadblock to what can be a ferocious Titans run game.

3) Get Jones-Drew Going
Let's face it: If the Jaguars win this year, it will be on the merit of outstanding play from Maurice Jones-Drew. Luke McCown may be serviceable -- heck, he may be even good -- but he's not a world-beater. Jones-Drew is.

Last year, Maurice Jones-Drew put up another 1300-yard season, but only managed 5 rushing touchdowns (and 2 receiving). Despite that, Football Outsiders ranked Jones-Drew's stats as 4th best in the 2010 season with nearly 240 Defense-adjusted Yards Above Replacement (DYAR) -- meaning, over the course of the season, Maurice added 240 yards that a typical or backup running back could have provided.

If the Jags want to win this Sunday -- and any Sundays this year -- they will need hearty helping of Jones-Drew.

4) Dominate the Passing Game
With the Titans, Matt Hasselbeck has a somehow worse supporting cast than in his time with the Seattle Seahawks. Outside of Chris Johnson, the Titans appear utterly bankrupt of elite offensive talent.

The Jaguars defense was epicly bad in pass protection last year, allowing an average of over 80 yards per game (Y/G) to the opponents' top wide receivers. The top receiver on the Titans staff this year is Nate Washington, who has a 36 Y/G career average.

What happens when a highly-moveable object on wheels gets hit by completely stopped and motionless force? Hopefully the Jags intercept a pass, but it's best to consult a physicist.

5) Get Powerful!
Last year, despite being the 2nd best run-blocking line in the league, the Jaguars were only 13th best in the league at power running, which is a running play "on third or fourth down, two yards or less to go, that achieved a first down or touchdown."

In other words, the Jags were able to break big plays great, but could no assert their will in the short and crucial runs nearly as easily. This year, the offense has the potential of soul-crushing amazingness if they can balance this other aspect of their run game.

If the Jags can balance these five key aspects on Sunday, they can expect not just a win, but a blowout and a strong start to the 2011 season.

Out (IR / Out / Suspended / Physically unvailable)