Florida State shocks No. 3 UNC with a 33 point deficit.

Florida State University has upset yet another top-five team, their fourth of the last six faced, dropping the University of North Carolina by a 33 point deficit. I was bold to predict a win at half time when there was a mere 8 point lead, but you could see it in the way Florida State played, they had every intent of shutting down the Tarheels. The students were ready to storm the court with six minutes left, yelling "Overratted" from the stands and singing the warchant.

The hero of the night: Deividas Dulkys. The Lithuanian senior had 32 points including 8 three-pointers, 4 steals, 4 assists and a block. Dulkys averaged 7.3 points per game last year and had only five three-point jumpers in the last nine games. Tonight, he matched his season point total. "Big man on campus," Dick Vitale shouted over and over again.

Michael Snaer had the second most points for the team with 17 and was dominant on the court as well - making his presence known with lots of contact. Okaro White and Bernard James stepped up for Florida State and should not be overshadowed either. White had 10 rebounds and 12 points off the bench, and James put up 8 points and managed 9 rebounds.

To prevent injury when the students rushed the court, UNC removed the team from the court with 14.2 seconds left at FSU coach Leonard Hamilton's suggestion. Five walk ons finished the game for UNC, and the students came pouring in as soon as the clock started again. The event ended with Dick Vitale getting a cellphone picture with Deividas Dulkys while hundreds of students danced on the court. 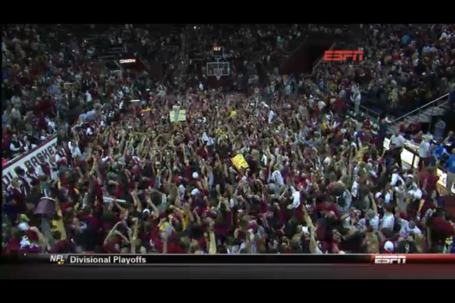