Thursday's nationally televised Heat game against the Los Angeles Lakers was promoted as a "Back in Black" event, with Miami scheduled to wear all-black uniforms. The Heat teamed up with league sponsor Adidas to create the uniforms. The reactions have been mixed, with Miami fans seem to be taking a liking to the unis while other NBA fans have been highly critical. The uniform features all black lettering on a black background, with nothing but white trim outlining the lettering and numbers. Even without Dwyane Wade, and LeBron dealing with the flu, this is still the marquee sports event of Thursday night, and the Heat felt obliged to try something different.

A couple photos of the alternate special uniform after the jump: 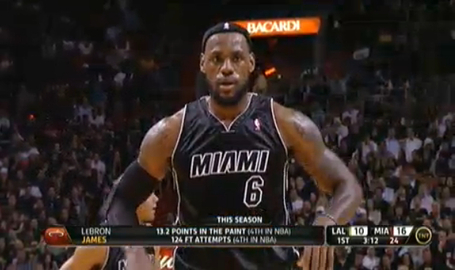 For more news, analysis, and discussion on Miami, visit SB Nation's Heat blog, Peninsula Is Mightier. For the perspective from the other side, visit SB Nation Los Angeles and SB Nation's Lakers blog, Silver Screen And Roll. For news and notes from around the league, be sure to follow SB Nation's NBA hub.