Alex Rodriguez and the Miami Marlins

Rumors are swirling about Alex Rodriguez and a possible trade. While rumors are just that, rumors, we'll take a look at what an A-Rod to the Marlins trade might look like, and why he would (or wouldn't) fit in on South Beach.

Share All sharing options for: Alex Rodriguez and the Miami Marlins

You might have heard of Alex Rodriguez. You know, one of the best shortstops of all time, gets paid a lot, plays for the Yankees except when he's benched for Eric Chavez -- that guy. Perhaps you've heard that he's having another tough postseason, and that the Yankees aren't playing him against right-handed pitchers too often. As is often the case in the Big Apple, this story is spiraling out of control.

Now the story is this: perhaps A-Rod is on his way out of New York. Well, former SportsCenter anchor Keith Olbermann believes that he has broken a big story: that the Marlins and Yankees are interested in a trade of the all-time great. Though it's based on a slightly-sketchy premise, and it hasn't been broken by one of the typical big-time news sources close to big team sources, there's been buy-in to this rumor. The wheels are turning.

Quite honestly, I have a tough time believing that a trade of A-Rod is a possibility. Not only does A-Rod have a no-trade clause, he's also one of the highest-paid players in baseball. Any team trading for Alex Rodriguez would have no interest in paying all of his contract. Beyond that, he's certainly in the decline phase of his career, often banged up, and a lightning rod for media controversy. While he may want to get out of New York, he's simply not a fit for most major-league teams, and the Yankees may not want to pay him a huge chunk of money to not play for their team.

But the real question is: is Alex a fit for the Marlins? The answer might be a little surprising. But in order to figure that out, we have to look at what kind of player Alex currently is. Then, we'll examine why (and why not) he'd fit with the Marlins, and what a potential deal could look like.

Who Is Alex Rodriguez?

I know the word right now is that Alex is washed up, done, kaput. His performance during this playoff run has been less than stellar, striking out 12 times in 25 plate appearances, and only getting on base 20% of the time. It's a bad scene, and it's not one that Alex is totally unfamiliar with. He's had bad postseason performances in '06, '10 and '11 as well, and there's the perception that Alex isn't a "clutch" player. (People with this perception usually ignore Rodriguez's '00, '04, '05, '07 and '09 postseasons, and his career .265/.372/.467 postseason slash line, but I digress.)

Alex also turned in his worst overall season with the bat in 2012, only hitting 18 home runs and posting a .352 OBP (low for Alex) in 122 games while battling a litany of minor injuries. wRC+, a statistic that weights all hitting contributions and compares it to league-average, has Rodriguez at 14% above league-average with the bat. That's far short of Alex's career wRC+ of 144, and his lowest number of any full season in the bigs.

Rodriguez is also an uninspiring defender at third base, and he needs occasional rest to keep the injuries from taking their toll. He's not a complete liability at third (a la Miguel Cabrera), but he's not a top-flight defender. Yet all of this together paints the picture of a player who's still a pretty solid 3B, at least on a rate basis. Don't believe me? Check the stats.

In baseball last season, there were only 18 third basemen who qualified for the batting title. Using the all-encompassing hitting stat wOBA as a guide, do you know where A-Rod sat in that list of 18? Eighth. Alex hit better than all but seven regular third basemen in 2012. Average wOBA for all third basemen this season was .320, but Alex's was .342. Washed up? Not quite yet.

If a team understands what they are getting in Alex Rodriguez today -- someone who is no longer one of the best players in the game, but rather a 100-game third baseman, who might benefit from time in left field or first base (or even better, as a DH) -- he's got value to a fair number of major league ballclubs. It's the extravagant, extraordinary contract, good for at least $118 million over the next five seasons, that keeps Alex from "fitting in" on most squads. 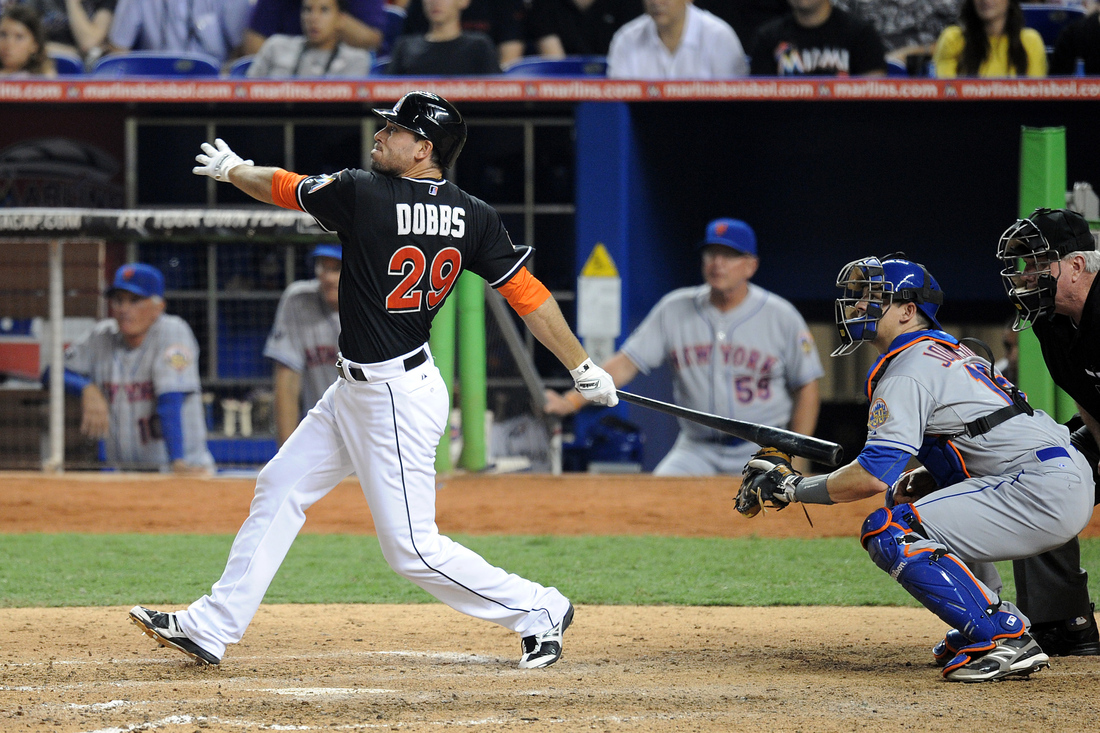 Why Should the Marlins Trade for A-Rod?

Actually, I'm of the belief that there are a couple of good reasons why the Marlins should trade for Alex Rodriguez, especially now when the Yankees might be most obliged to deal him. First and foremost, third base has been a complete disaster for the Marlins in recent years. Raise your hand if you're sick and tired of seeing players like Greg Dobbs, Wes Helms and Jorge Cantu man the corner in South Florida. (I bet most of you are raising your hands. I am.)

The Marlins have no good internal option at this position. And as I outlined in my article earlier this week, this is a team that desperately needs to increase its offensive output. This is a bad offensive team right now. While Alex isn't exactly a "build-for-the-future" piece, he could help the team immediately, and bringing him on surely wouldn't cost the team any future pieces worth keeping.

Believe it or not, third base isn't a stacked position these days. It's tough for any team to find a big bat at third, and though the Marlins acquired Zack Cox in the Edward Mujica deal, he's hardly a can't-miss prospect. And the free-agent market isn't exactly swarming with options, unless you're interested in Kevin Youkilis (not all that dissimilar to A-Rod at this point in their careers) or Marco Scutaro. Unless the team could acquire a young, talented third baseman in a deal for Josh Johnson, there probably isn't any help coming at this position any time soon.

Why Shouldn't the Marlins Trade for A-Rod?

It's about the money, stupid. The Marlins aren't a high-payroll team, despite what their spending spree offseason might have you believe. If this deal presented itself in the same fashion last season, perhaps the Marlins might have bitten on bringing in the hometown hero. But the Marlins aren't likely to take the world by storm in 2013 (or 2014, let's be real) unless they make smart, high-reward acquisitions by the wheelbarrow-ful. It only makes sense for the Marlins to bring in Alex if they don't cripple their spending going forward, as the team has a host of holes to fill. And any trade for Alex Rodriguez would probably ensure that too much money would be spent on an aging corner player with injury issues, rather than on any number of established veteran players.

Now, I won't entirely discount that the presence of A-Rod might bring a few extra fans to the ballpark, or get the team national attention during his inevitable run to 700 homers, but these effects on actual revenue might not make the team enough money for it to be "worth it" financially. Sportswriters tend to overvalue superstar presence as a driver of attendance over more important matters (almost all of which rhyme with "binning"), but he'd probably be a nice marketing point for the Marlins. Just not enough to make him worth even 50% of his current and future salary. 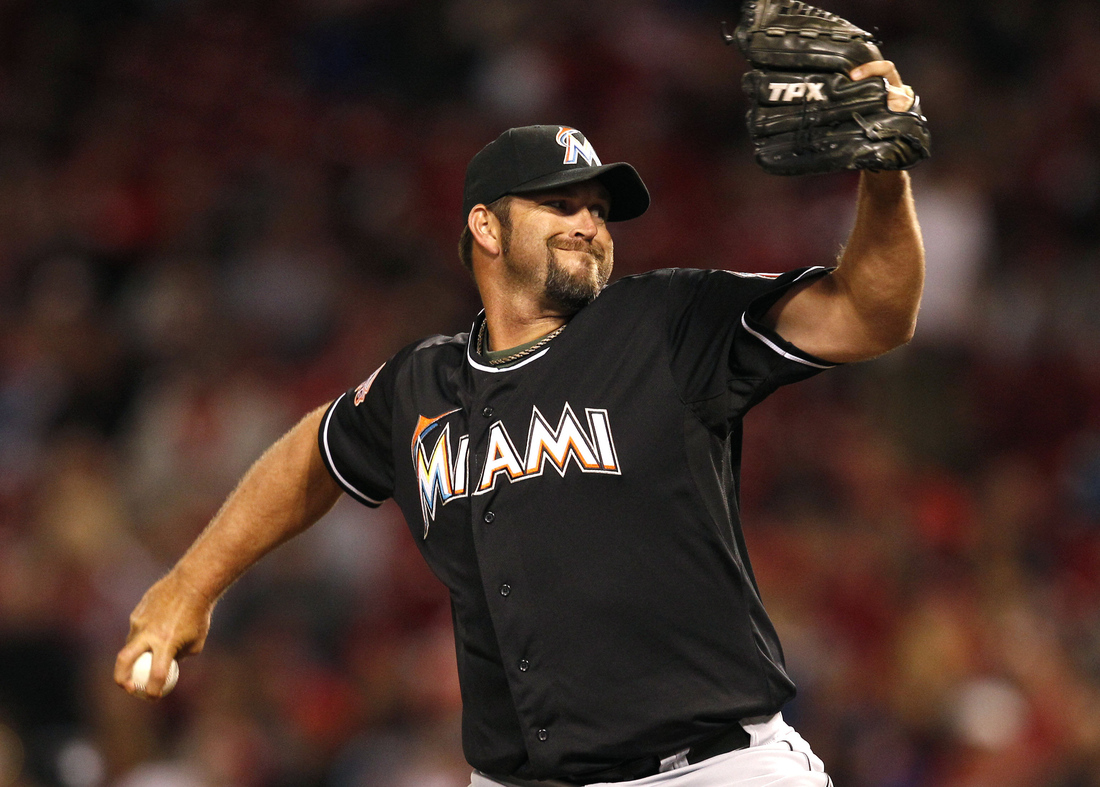 Let's say that Marlins and Yankees management do want to make an A-Rod trade, and each team has the ownership buy-in to make this work. The big question now is, what might an A-Rod trade look like for both parties?

Let's start with Heath Bell, because any deal for A-Rod would have to involve substantive money changing hands, whether it's in terms of cash or big-time contracts. And the Marlins would probably insist on Heater leaving town. While Bell wasn't a big fan of his first time in New York (with the Mets) one would have to imagine he'd jump at the chance to get out of his unhappy situation in Miami. Bell's deal appears to sit at $20 million over the next two years, which is a drop in the bucket compared to the Rodriguez contract, but there you have it. And the Yankees can find room to hide Bell, or hope for a return to form (unlikely) at the end of their bullpen.

If the team was really looking to dump payroll to open up room for A-Rod, packaging Mark Buehrle in this deal might make sense initially, but I don't think that's a good fit. For one, Buehrle is actually pretty good. For another, the Yankees might be looking to gain some long-term flexibility as a result of an A-Rod deal. Josh Johnson could be a fit, but he's so good that he might be able to pry a better prospect free from another franchise.

Ricky Nolasco, on the other hand ... now there's a fit. Nolasco is entering the final year of his contract with the Fish, and is due to make $11.5 million in his last season. Sure, Nolasco isn't exactly a perfect fit for homer-happy Yankee Stadium (1.10 career HR/9), but he'd at least be a consistent presence at the back end of the Yankee rotation. With Phil Hughes, Andy Pettitte and Michael Pineda as question marks next season (in one way or another), a little extra stability and depth might not hurt. And it's only a one-year commitment.

With Nolasco and Bell in the deal, that leaves an $86.5 million dollar discrepancy between A-Rod's contract and the money coming back. Obviously, the Yankees would have to take on a huge chunk of that salary to facilitate the deal. A player of Alex's skillset is probably worth somewhere around $5-$10 million dollars per year at his current ability level, with a continued decline coming. With the potential for big contract incentives to kick in at certain HR milestones, I can't see the Marlins taking on much more than $40 million of Alex's current contract, without the milestones. So that would have the Yankees kicking in, let's say $45-$50 million of Alex's deal to facilitate the trade. With the Marlins on the hook for approximately $40 million dollars over five years (plus the milestone cash), that's probably a worthwhile deal for Miami.

I'm not convinced that either side of the deal would need a big-time prospect to round out this deal, given that the Yankees would be eating so much of A-Rod's salary and the Marlins would be ditching Bell, but if one would work himself into this deal, it'd probably move from the Yankees to the Marlins. Perhaps the Marlins could pry loose a player like lottery ticket Ravel Santana, but not a high-end prospect like Mason Williams, Gary Sanchez or even what's left of Dellin Betances.

In closing, Alex Rodriguez is a good -- but not great -- fit for the Miami Marlins for a couple of reasons. But the one biggest reason why Alex is not much of a fit, his extraordinary contract, is a big enough reason to put this deal completely out of reach. Miami has said that they're looking to cut payroll, and the window to win is too far out for A-Rod to make a big enough impact. If the Yankees were willing to eat two-thirds of his contract? Perhaps, but why would the Yankees pay $70-$80 million to ditch a sure-fire Hall of Famer who, believe it or not, still is a good baseball player?

The Dodgers, on the other hand? If A-Rod was paired with a top-tier prospect like Gary Sanchez, and Andre Ethier was heading back to New York? Now that's a possibility.