Ever wonder what it would look like if Jeff Driskel and Tim Tebow were painted by Michelangelo? No? Oh ... well, here it is anyway (via reddit): 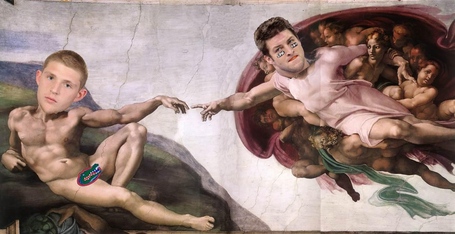 Though, it apparently wasn't long for this world:

The sign of the day has been banned! #Gameday #GoGators twitter.com/sparker417/sta…

This is, of course, the work of one very creative/disturbed Florida Gators fans parked behind the pretty mug of Kirk Herbstreit on Saturday morning's College Gameday on ESPN.

Driskell is Adam, which would make Tebow the creator I guess ... know what? I don't have to explain it. You all learned about Michelangelo in fourth grade. Hopefully, none of you ever replaced the art with your favorite athletes naked. Let's move on to something more tasteful.

Well the sign of the day in Gainesville, oh so creative you college students #gameday #espn twitter.com/ZachFreshwater…