An Ode To Dan Johnson: A Tampa Bay Rays Legend

Share All sharing options for: An Ode To Dan Johnson: A Tampa Bay Rays Legend

The Tampa Bay Rays lost a legend today; An Icon; A Deity; A man whom never needed to pay for his tab at Fergs ever again. Make sure you are sitting down when you read this, Rays fans, because the news is hard to bare. The owner of arguably the two most important homeruns in franchise history, the Great Pumpkin himself, free agent 1B Dan Johnson signed a minor-league contract with the Chicago White Sox, Wednesday.

Let that sink in for a second. Dan Johnson is no longer a Ray...

Sure, most of you probably saw this coming. With the acquisitions of DH Luke Scott and the triumphant return of 1B Carlos Pena, Johnson didn't seem likely to find a home at Tropicana Field this summer. Beyond a retooled roster, Johnson's .119/.187/.202 slash line with the Rays in 2011 made not bringing him back an easy decision for GM Andrew Friedman. But this fan can't help but worry that Johnson may have taken some magic with him to the Southside of Chicago.

There is an empty feeling in my gut today, a feeling that is difficult to describe. It as if someone has taken away the safety net from the Rays, that suddenly a comeback is less likely, a game tying homerun will be impossible to find. Johnson hit just two home runs in 2011 for Tampa bay, but they were both impressive: A ninth inning job off his new teammates in Chicago to end a 0-6 start to the season and perhaps the most improbable game tying blast in MLB history against the Yankees in game 162. Evan Longoria will get plenty of credit for sending the Rays to the playoffs with his walkoff extra-inning shot but #3 doesn't get that chance if Joe Maddon doesn't have the guts to pinch hit Johnson in the 9th.

WIthout Dan Johnson riding the bench, waiting for a closer to punish, to whom will the Rays turn to save their seasons in the waning moments of games? Who will carry the magic bat, and round first with such childlike vigor, flashing that grin of disbelief that even he can't believe what he just did? Johnson may never be Carlos Pena around the bag, or Luke Scott with the stick, but it's Johnson's magic we will always remember. His incredible talent of hitting homeruns at exactly the right time. From Fenway in 2008 to St. Pete in 2011, Rays fans will always remember Johnson's heroics, and for that, we will always miss him. 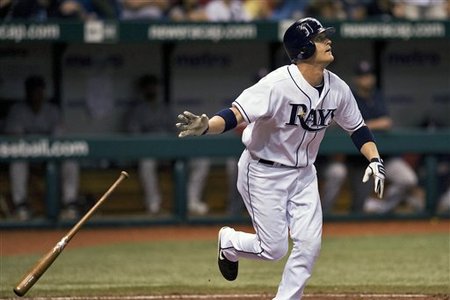