RaysFest: Look Out For DJ Kitty

Share All sharing options for: RaysFest: Look Out For DJ Kitty

And now the Rays have their equivalent to the Rally Squirrel. I'm going to have a hard time explaining this one to my friends...

In honor of the viral video DJ Kitty, which the Rays have used in stadium to get the crowd going, a certain feline will make an appearance at this weekend's RaysFest. 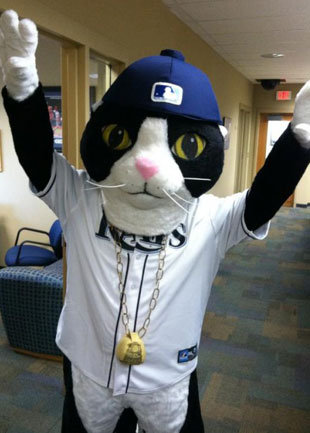 Backwards cap and (possibly) the 2008 AL Championship ring around his neck included. Although that could be the other monotonous Rays fan motivator - the cowbell - instead. Someone report back and let us know, will ya? And no, he's not replacing Raymond, just spicing things up a bit.

So if you're already headed to the Trop for fanfest, you have one more thing for your kids to look forward to.

And for those who haven't seen this scoreboard version of DJ Kitty, it's linked below. Come for the mildly un-entertained kitty, stay for the fist pump (1:24).