With LeBron James, Dwyane Wade, and Chris Bosh teaming up in South Beach, the Miami Heat are not only the main attraction in South Florida but also the main attraction in the NBA (non-Jeremy Lin division). In attendance at Sunday's nationally televised showcase game against the Orlando Magic was a former President of the United States. William Jefferson Clinton was in the front row, sitting courtside next to Miami owner Micky Arison as they took in the Heat's blowout of the Magic. At one point in the first half, Clinton even saved a ball that went flying into the stands.

Photo of Clinton being presented with a personalized Heat jersey after the jump: 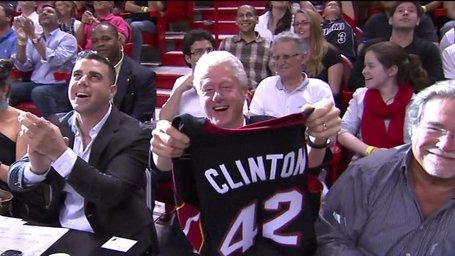