Playing alongside Kings, both friendly and hostile, Dwyane Wade enjoyed a regal night at the American Airlines Arena.

In advance of their showdown with the Linsational New York Knicks, the Miami Heat faced a very ungracious bunch of Sacramento Kings. After a very close first half, the Heat pulled away in the fourth quarter, beating the Kings 120-108. The 120 points are the second highest total for the Heat this season and the most since beating the San Antonio Spurs on January 17th.

The Heat had an uncharacteristically balanced attack, with 6 players scoring in double digits, and nearly four players with 20 or more points. Dwyane Wade led the Heat with his second double-double of the season, tallying 30 points and 10 assists (the last 10 assist game Wade had was nearly two months ago). Chris Bosh and Mario Chalmers each had 20 points, and Bosh had an additional 10 rebounds for his 9th double-double of the season. LeBron James had 18 points and 8 assists.

Norris Cole and Udonis Haslem led the reserves for the Heat, scoring 12 points and 10 points, respectively.

The Kings sought to rebound from their 1 point loss against the Cleveland Cavaliers Sunday night, came out strong in the first half. Led by the guard tandem of Tyreke Evans (21 points and 10 assists) and Isaiah Thomas (24 points and 5 assists), the Kings matched the Heat's pace and intensity throughout much of the game. Marcus Thornton enjoyed a great first half and finished with 23 points.

After being out-rebounded in the first half and generally lacking energy, the Heat bounced back in the second half and finished even with the Kings on the boards at 41 a piece. While the Heat may have been looking ahead to their match up with the ever feisty New York Knicks, the Heat came out in the second half knowing what they lacked and made the proper adjustments to finish the game on a winning note. 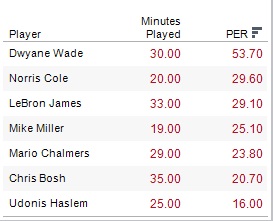