The New York Knicks leave Miami with some "lindigestion" as the Heat handle them in the second half.

In a heavy weight battle between two possible playoff foes, the Miami Heat landed the last punch in Thursday night's lintriguing match-up, beating the New York Knicks 102-88. Facing intense media coverage over the last several weeks, the Knick's new "rising star" Jeremy Lin was unable to overcome the frantic Heat defense in what will be considered by many as his worst game since making his way onto the national scene.

Lin finished with as many turnovers as points (8), and finished 1 for 11 from the field. Facing double teams, traps of screens, and the occasional LeBron James man-coverage, Lin was even unable to get his teammates involved in the game, as he finished with only 3 assists.

LeBron James, Dwyane Wade, and Chris Bosh, Miami's Big 3, all finished with at least 20 points. LeBron stuffed the stat sheets once again, as he had 20 points, 9 rebounds, 8 assists, 5 steals, and 2 blocks. Wade also contributed in all facets of the game, finishing with 22 points, 5 rebounds, and 5 assists. But in the end, it was Bosh who provided the steadying presence on offense as he finished with 25 points and 8 rebounds including an efficient 11 for 17 from the field; Bosh also finished with the highest PER for the game.

It was a back and forth battle for most of the game, with the Heat taking a narrow lead into halftime. But as the Heat have done countless times during their winning streak, they pulled away in the second half. And make no doubt about it, despite the high scoring from the Heat's Big 3, this was an all around team win. Joel Anthony, aka the Warden, finished with 6 rebounds and 5 blocks and Mario Chalmers contributed 8 points.

The Heat's bench combined for 27 points in the contest. Norris Cole had 10 points, Udonis Haslem had 6 points and 9 rebounds, and Shane Battier had 8 points including a couple of key three-point shots to pull away from the Knicks. 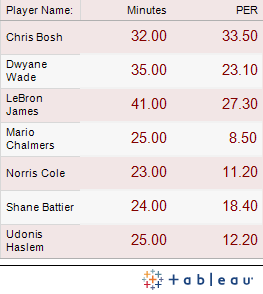 Impressed By: Chris Bosh (PER: 33.5). The "afterthought" of the Heat's winning streak, Bosh was surged to the forefront of the contest. Hitting mid range jumpers throughout the game, and drawing praise from fan and announcer alike, Bosh dominated his match-up with Stoudemire and Chandler. Let's hope he draws on this for future games.

Depressed By: Perimeter defense. Steve Novak was able to keep the Knicks in the game with timely three-point shots. Long distance shooters have been the one kryptonite to the Heat's otherwise super defense. They need to be able to close out faster, and more effectively, if they want to contain their opponents shooters.

Next Up: Half the Heat will enjoy the All-Star break from home, while the other half will be in Orlando enjoying the festivities firsthand. Look for James, Wade, Bosh, Chalmers, Cole, and James Jones over the weekend as they participate in their respective contests. The Heat next play on March 1st, against the Portland Trailblazers.