Juan Pablo Montoya's scary crash into the back of an emergency truck set the Daytona 500 track ablaze with 200 gallons of jet fuel. There are forty laps to go but NASCAR crews continue to work on the track that was coated with jet fuel. The crews used Tide powder laundry detergent to wash down the track and try to get it back in shape for racing.

An animated gif of the crews washing the track with Tide: 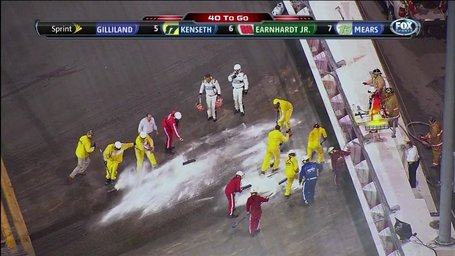 NASCAR President Mike Helton said the track would be back in shape and the racing would resume within 30 minutes. Helton said that there were just a couple "gouges" which he said was not uncommon to have in a track. He also said there were some hotspots in the wall but that his crews were used to repairing that. Dave Blaney leads but it appears the last 40 laps will be run. 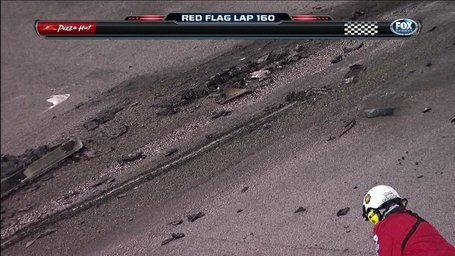