Share All sharing options for: Super Bowl 2012: Both New York And Boston Running Ads That Claim Giants And Patriots Have Already Won

It happens way too often - an advertisement for "championship gear" hits the airwaves, internet, or print before a title game has been played. For Super Bowl XVLI, both New York and Boston are guilty of running premature ads. It's pretty clear that both teams, and markets, have their championship gear already made and are ready to sell it as soon as the final whistle blows tonight.

On Saturday, a splash page for Giants.com promoted New York as Super Bowl Bowl champions, and provided a link to immediately shop for championship gear. 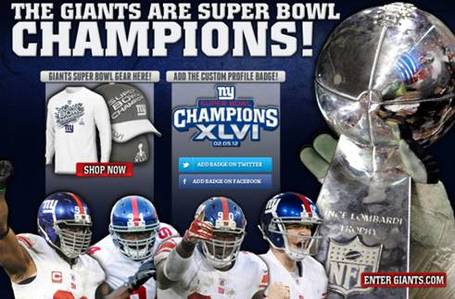 The Boston market matched the New York screw-up on Sunday morning, however, with Dick's Sporting Goods running ads for local New Englanders to stop in and shop for their Super Bowl gear.