The Miami Heat pushed their home-court win streak to 14 games with their victory over the surging Orlando Magic Sunday night, only the Oklahoma City Thunder have had a longer streak this season. The Heat won the battle over the Magic who had won 6 of their last 8 games, and had found new life after Dwight Howard committed to playing for another year at Thursday's NBA trade deadline. The Magic had beat the Heat four games ago, in an overtime victory that many speculate gave Howard enough trust in the current makeup of the Magic to commit to another year. Nonetheless, the Magic were unable to recreate the 3-point shooting success they had during their last meeting with the Heat.

While LeBron James struggled with his shot most of the night, the Heat relied on Chris Bosh to keep the game close and then turned to Dwyane Wade whose 14 fourth quarter points put the game out of reach for the Magic. LeBron had trouble with all facets of scoring; his jumper was off, he had trouble finishing at the rim, and even committed four turnovers. But as we've seen all season long, LeBron contributed in other ways and finished with 12 rebounds, 7 assists, and five assists.

Chris Bosh and Dwyane Wade landed the scoring punches that LeBron kept missing. Bosh finished 9 for 13 with 23 points and 7 rebounds, and started the game nearly flawless. He made his first five shots, playing aggressively with the duo of Ryan Anderson and Hedo Turkoglu guarding him. Dwyane Wade added 31 points, 6 rebounds, and 4 assists, in a fine performance. Wade's magical, some pun intended, fourth quarter included a series of floaters around the rim and long jump-shots; but above all, it was Wade's energy that permeated through the nationally televised broadcast.

Dwight Howard had 18 points and 11 rebounds for the Magic, but continued his season-long struggled at the charity stripe (4 for 10 FTs). Jason Richardson and Jameer Nelson combined for 25 points but overall shot poorly (a combined 10 for 27). Orlando's saving grace came in the form of Quentin Richardson, who, playing against his former team, connected on 5 three-point shots that kept the Magic close throughout the game.

Despite it all, it was Wade's second half dominance and perseverance that made the difference. It goes without saying that when Wade plays at his signature frantic pace, the Heat are a tough team to beat. 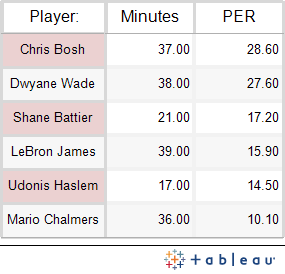 Impressed By: Chris Bosh (PER: 28.6): The last time Chris Bosh scored 23 points? Well don't look too far, it was against these same Orlando Magic in their last meeting. Bosh has largely struggled with shot selection and shot over the past couple of weeks; however, he seems to be at his best going against Dwight Howard's Magic. This bodes well for the Heat as the playoffs begin to loom into the picture. If the Heat finish 2nd in the East behind the Bulls, they might have a second round match-up with the Magic, and if Bosh can continue his scoring splurge against them I like the Heat's chances.

Depressed By: Norris Cole: Without Mike Miller, the Heat's bench as a whole looks abysmal. They combined for for just 13 points tonight. But the biggest culprit and general disappointment: Norris Cole. That early season enchantment has run dry for Cole. He hasn't scored in double digits since the beginning of March and when his shot isn't falling, Cole has failed to contribute in any other category. His assist per game average has fallen nearly one per game since his debut and his shooting percentage continues to plummet. Cole needs a pep talk or a warm bath with Kate Upton or something.