Behind an unprecedented 17-0 run, fueled by a playoff-like atmosphere at the American Airlines Arena, the Heat's home-court winning streak reaches 14.

Share All sharing options for: Chris Bosh, Fans, Roar The Miami Heat 99-95 Over The Phoenix Suns

When the Heat needed an energy boost in the fourth quarter, trailing by 8, they didn't turn to anyone on the floor or the bench. Rather, they looked to the stands, at a packed American Airlines Arena that was filled with raucous fans alternating shouts, with all their impassioned Hispanic might, of "LET'S GO HEAT" and "DEFENSE." As the NBA TV announcers said, it was a mad house. The Miami fans, occasionally maligned because of their tardy attendance, propelled the Heat to a commanding 17-0 run late in the fourth quarter that put the Heat ahead for good.

It was a crazy final minute of play. LeBron James barelled into a Grant Hill screen and laid on the floor for what seemed like nearly five minutes, then Dwyane Wade violently jumped into Jared Dudley as he attempted a three pointer. Even the final two seconds were hectic- Dwyane Wade received the inbound pass from Chris Bosh and threw the ball to the front court hoping for the time to expire... except the clock keeper never started it. After all the furious action, the Heat extended their home win streak to 14 games with a 99-95 victory over the Phoenix Suns.

During the up and down affair that saw both LeBron James and Dwyane Wade struggle shooting, it was Chris Bosh who kept the team poised to win. Bosh had 29 points on just 16 shots, and added 8 rebounds, 2 steals and a block to an impressive stat line. James scored 20 points and also added 8 rebounds and 6 assists. For the second consecutive game, Wade struggled in the early parts of the contest and picked his game up late; he finished with 19 points, 7 rebounds, and 5 assists.

Late in the second quarter, however, LeBron left the game quickly to attend to some matters in the woodshed:

LeBron throws down the hammer! (via NBA)

With Joel Anthony missing the game because of a sprained left ankle, and incumbent starting center Dexter Pittman dealing with foul trouble for much of the game, Udonis Haslem played 31 minutes in the game and provided major dividends for Erik Spoelstra and the Miami Heat. Haslem notched a season high 15 points and added 9 rebounds and tied a career high with 12 free throw attempts. By far it was Haslem's finest performance of the season.

On the Suns' end it was a maddening night for coach Alvin Gentry. The Suns battled with the Heat, in fact led for much of the game, throughout the night, but let the game slip out of hand in the final five minutes. The Suns impressively had no player score more than 19 points, representing the balanced attack that Steve Nash is able to deploy even at this late stage of his career. It was Grant Hill who notched the 19 points and he also added 7 rebounds and 3 assists. Nash finished with 9 points and 10 assists, but was hounded defensively by Mario Chalmers who forced the savvy veteran into 7 turnovers.

Marcin Gortat added 13 points and 8 rebounds and Markieff Morris came through from the bench to score 12 points for the Phoenix Suns. Robin Lopez, Shannon Brown, and Sebastian Telfair combined for 23 points from the bench as well. 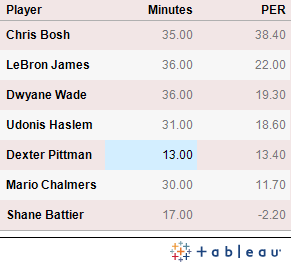 Impressed By: Christopher Wesson Bosh (PER: 38.4 (YOWZAAA)). Oh Christopher Wesson, how your potential in the Heat's offense is so tantalizing! When you want to (and Dwyane and LeBron oblige), you can carry our at-times anemic half-court offense much like you did in your Toronto days! I urge you, be as assertive as you want. With this tireless effort on your part perhaps the Heat could already be champions, but let's not lament, let's just hope that you continue this run for the course of the season.

Depressed By: Heat's Defense. The Suns shot 45% from the floor and 40% from 3-point range, it's quite miraculous that they only ended up with 95 points. On the day after the Chicago Bulls made a team statement by holding the Orlando Magic to 59 points for an entire game, the Heat's defense suffered without Joel "The Warden" Anthony sidelined. Steve Nash ran the pick and roll effortlessly and tirelessly, and the Heat's patented defense did not show up until the last five minutes of the game.

Next Up: The Heat are off until Friday, when they play the Detroit Pistons to kick off a 3-game road swing. They'll be kicking off at 7:30 PM ET.