Kobe puts forth his case, as to why Dwyane Wade has to wait a few more years before being labeled the best shooting guard in the game.

The Los Angeles Lakers and Kobe Bryant put together a dominating performance to upset the Miami Heat 93-83 during Sunday afternoon's contest. With much of the pre-game build up focusing on Dwyane Wade foul on Bryant during last weekend's All-Star festivities, the Lakers came out focused their efforts avenge their last loss to the Heat, rather than find revenge for Kobe's fallen nostrils.

Kobe finished with 33 points, his third straight game scoring 30+ all of which have come while wearing a protective mask after the injury he suffered at the hands of Wade. Perhaps fueled by the ongoing debate of deciding who the best shooting guard in the NBA is, Bryant came out set on ending the discussion, at least for tonight. Bryant abused Wade on the offensive end, hitting his first five shots to start the game; many of his shots came on fade-away jumpers and aggressive drives to the basket.

Meanwhile Wade played tentatively, to say the least. Wade took a season high four 3-point shot attempts, only making one. He finished with 16 points on 7 for 17 shooting; his trademark fearlessness was hardly, if ever, on display in the game. Even more eerily, Wade fouled out with over 5 minutes remaining in the game; he picked up 4 fouls within three minutes of each other.

The Heat, playing without Chris Bosh for the third straight game, thoroughly missed his presence. LeBron James found himself playing multiple positions throughout the game, even having to guard Andrew Bynum in the post on more than one occasion. James finished with 25 points, 13 rebounds, and 7 assists (including 3 steals and 2 blocks), but it was not enough for the Heat to overcome a relentless Lakers team.

Andrew Bynum and Metta World Peace set a physical tone early and often. The game included a couple instances of shoving and trash talk, as James and Troy Murphy got into an altercation as did Pau Gasol with James later on in the game. Bynum finished with a double-double of 16 points and 13 rebounds, and also had 4 blocks. Metta World Peace had possibly his best game of the season, scoring 17 points, 7 rebounds, 4 steals, and 3 assists.

For the Heat, it was a rather quiet night overall. Udonis Haslem, starting in place of Bosh, laid a metaphorical egg; he went scoreless in 19 minutes and only notched 2 rebounds. I wouldn't expect Haslem to earn another start from here on out (he recorded a putrid -10 PER). In fact, not counting LeBron, the entire front court of the Heat had a tough day. Haslem, Dexter Pittman, Joel Anthony, and Juwan Howard each combined to go 2 for 16 in over 67 minutes of action. 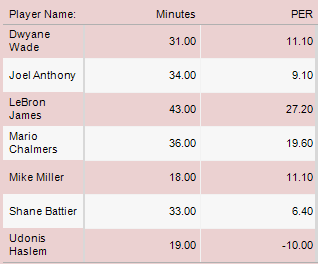 Impressed By: Am I allowed to say Kobe here?

Depressed By: Heat's toughness. A key to the Miami Heat's success is attacking the paint and going to the charity stripe. LeBron and D-Wade combined to attempt only 5 free-throws. That's not a recipe for success. Whether the pregame drama got into Wade's head and forced him into a more passive brand of basketball I can't say for sure, but he surely played that way.