The Florida Panthers club president Michael Yormark is well-known for his interaction with fans on Twitter but on Tuesday, he got into a bit of a spat with a Devils fan who mocked him. Yormark said the Cats would stop selling rats at their store because fans were tossing them on the ice during face-offs and the regular course of live action. He intimated that he thought the Devils fans were the ones tossing the rats, hoping to create a potential delay of game penalty. New Jersey fan Lauren Rubino accused Yormark of acting like an ass, and the Florida President promptly replied: 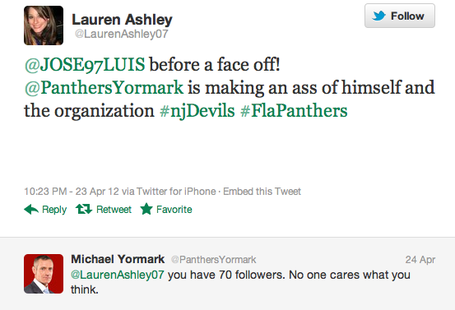 Well, she HAD 70 followers. The spat went viral shortly thereafter, with Greg Wyshynski getting in her corner and the Newark Star-Ledger picking up the story. As of this writing, she's just shy of 3500 followers -- and has 211 more followers than Yormark. Oh, and the club also gave her two tickets to a suite at the Prudential Center for Game 6.

For all your news, analysis, and discussion on the Panthers' playoff push, visit Litter Box Cats. For the opponent's perspective throughout the series, head over to In Lou We Trust. For all your hockey news and notes and more on each playoff series, keep up with SB Nation's dedicated NHL hub.