The Florida State Seminoles exploded on the offensive side of the ball Saturday night at Doak Campbell, beating up on Clemson for a 49-37 win. It was a classic back-and-forth with constant highlight touchdowns on both sides, but the 'Noles' second-half surge was one to remember.

There was also a little highlight off the field as well, as the Florida State band played a new song in their 2012 arsenal. With the Tigers facing a fourth and 23 at the end of the first quarter, the FSU band struck up the theme from HBO's hit show Game of Thrones. Video after the jump, in which the music plays as incongruous background to Kirk Herbstreit's hard-hitting analysis:

One can only hope is was inspired by this excellent Bjoern Werner meme: 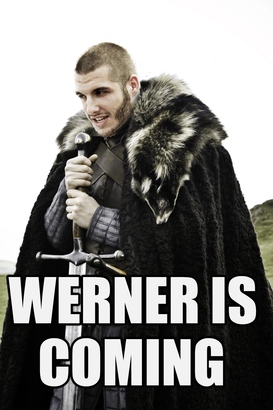 via The Miami Herald

For more on the Seminoles, head over to Tomahawk Nation. For more on the Tigers, check out Shakin' The Southland. And for all your college football news and updates, visit SB Nation's NCAA football hub.