UCF is set to take on their toughest non-conference opponent of the season as the post-season tested Old Dominion Monarchs come to town.

Share All sharing options for: Knights Take On Monarchs

The UCF home non-conference schedule has been rather soft to date, but that changes later this afternoon as the Knights host their toughest non-conference home opponent in quite some time. The tail of the tape between these two schools is rather close (data courtesy of statsheet.com) 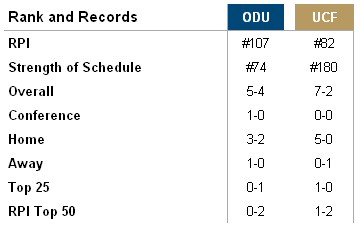 The Monarchs bring a 5-4 record into this game with losses to Northern Iowa, Kentucky, Vermont, and most recently Fairfield. They have the 51st ranked defense in the nation allowing only 60.4 points a contest. The most points they have allowed this season was 69 points in a victory over Long Island back in early November but many of their games have been close affairs with the team winning or losing by ten or less points in every game since the first game blowout loss to a tough Northern Iowa team.

Old Dominion is coming off two straight seasons of post-season play and is coached by Blaine Taylor who has led the Monarchs to a 217-114 record since the 2001-2002 season. His team is led in scoring by junior forward Nick Wright who is scoring 12.2 points per contest and he gets help from senior swingman Kent Bazemore who is scoring 11.6 points per contest and senior forward Chris Cooper who is a strong post presence and is averaging a double-double on the season.

The Knights have their own trio of scorers in double digits with Marcus Jordan leading the way at 17.1 points per game along with Keith Clanton at 16 points per contest and Isaiah Sykes stepping up his offensive output this month at 12.1 points per contest. The opposition's defensive strategy in the past few games is to surround Clanton any time he touches the ball and pack in a zone defense forcing the Knights to shoot from the outside. ODU will likely do the same today which will again test the outside shooting of the Knights which has been inconsistent so far this season.

Tip-off is at 5pm today at the UCF Arena with the Knights favored by 5.5 points.