Kenny Boynton and Marshall Henderson came to the rescue for their teams yesterday, getting Florida and Ole Miss wins after being given runs for their money by lesser-ranked teams.

The top squads left in the SEC Tournament won Saturday, but not without a fight from a pair of teams that wanted to keep their NCAA Tournament hopes alive.

Although both matchups ended up as double-digit wins for the top seeds, that doesn't really portray how the games went. Alabama and Vandy each entered the half either tied or with the lead, but both squads found their stars, with Kenny Boynton and Marshall Henderson putting on impressive spurts to lead their teams to victory.

Here's a look at how Saturday's semifinals turned out:

Alabama were up three at the break and led 37-27 just before the under-timeout in the second half. Then, Boynton took over: he scored 11 straight points as part of a 15-0 run for the Gators. It's the first real close win for the the top team in the nation per Ken Pomeroy's numbers, who had won every one of their victories this season by 12 points or more - that lone 12-point win also coming against Alabama in a game they had trailed by eight late as well.

Now, Alabama must wait: they're definitely a bubble team, so they'll be anxious on Selection Sunday.

The Commodores wouldn't pull off a freak repeat in the SEC Tournament, as Henderson shot them out of this one. The game was tied at halftime, but Henderson had 14 of his 23 points in the second half. Perhaps the more impressive game was by Reginald Buckner, who went 6-for-7 with 15 points despite hitting just 3-of-11 free throws. Vandy had a dismal shooting performance, going 19-for-56 from the field and 6-for-30 from beyond the arc.

Here's a look at the updated bracket: 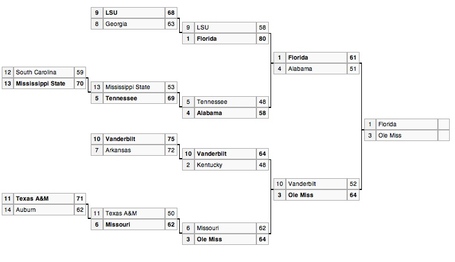