Florida still hasn't won a game by less than ten points, making them arguably the most dominant squad in the nation. Can they get a 30th win and another trip to the Final Four against Trey Burke and the Wolverines?

Michigan pulled off one of the least likely comebacks in NCAA Tournament history Friday night. Silly storylines claim that Florida can't win close games. They'll square off for a trip to the Final Four on Sunday.

The Wolverines were down 10 to Kansas with about 2:33 left in the game. That gave them a win probability of .6 percent. That's not a lot — roughly 1 in 200. Ken Pomeroy noted that out of all games this year, only 13 had less likely finishes, per his probability model. But Michigan has Trey Burke, so this happened: 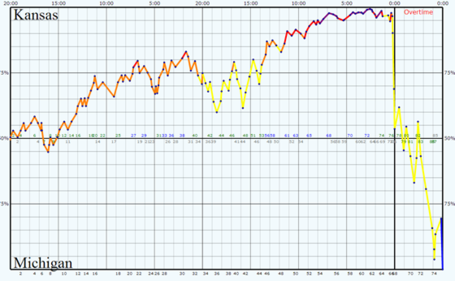 Kansas stopped scoring, and after failing to record a point in the first half, Burke hit a 30+-foot pullup to send the game into overtime and two more threes in the extra session. He ended the night with 23 points. Mitch McGary, the freshman who spent most of the year coming off the bench, did lots of mean things to Jeff Withey, generally considered one of the best post defenders in college basketball, finishing with 25 points and 14 rebounds.

Florida's problem is that they've been too dominant. They have 29 wins, all of them by at least 10 points. That means they're one of the best team in the country — Pomeroy's rankings have had them listed as No. 1 for the majority of the season. But their six losses — all by single digits — have given them the reputation of not being "clutch", which is something that will surely be harped upon considering how ridiculous Michigan's comeback Friday was.

Michigan's a daunting opponent, with four players likely to eventually be lottery picks in the NBA Draft. But what the Wolverines have in pure offensive firepower, Florida arguably matches in defensive tenacity, and both teams are built 1-through-5. There aren't many players that can randomly end up anywhere on the floor like Will Yeguete can, Patric Young holds down the paint, and nobody really commits fouls. With Mike Rosario and Kenny Boynton alternately scoring and feeding either Young or gunner Erik Murphy, they get the job done on offense as well.

There's a lot of really interesting matchups here, from whoever gets stuck on Burke to Young-McGary in the post. Both teams are able to generate scoring from pretty much every position on the floor, so just shutting down Michigan's deadliest player won't necessarily be enough.

Here's the info on Sunday's game:

• The best and worst from a sweet Friday

• Joakim Noah is more interested in Florida than Craig Sager