Lying In the Weeds - A 2011 Florida Gator Football Preview

Share All sharing options for: Lying In the Weeds - A 2011 Florida Gator Football Preview

For the first time in quite a while, the University of Florida's football team doesn't have a bulls-eye directly on its logo. There's no quarterback every opponent hates, few offensive linemen that has pro scouts drooling. The coaching staff no longer boasts a head coach with two National Championships.They no longer reign as the highest ranked team - even in their own state.

No, for the Gators, its a strange sensation to be just one of the guys. There's no pressure of being the heavy favorites to represent the SEC East in the Conference Championship(although in Gainesville there's always pressure to win - even if its not expected). The flavor of the month is now Steve Spurrier's Cocks of Carolina. Rivals are checking them off as a W after spending over half a decade under Florida's shoe.

It's happened to Tennessee and Georgia - once major football powers now slumming around with the likes of Vandy and Kentucky. Could it possibly be happening to Gator Nation?

As Lee Corso once said, "Not so fast, my friend."

Florida still boasts some of the best talent in the nation and with defensive guru Will Muschamp at the helm along with offensive genius (and four time Super Bowl champion coach) Charlie Weis, they offer some of the best coaches in the country to go with that talent.

So where does that leave us with our 2011 Florida Gator Preview? 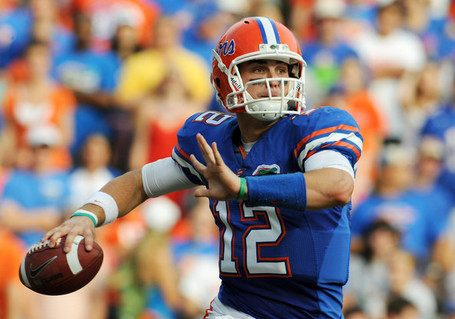 Poor Johnny Brantley. In the minds of many Gator fans he's just the bridge from Tebow to Driskel. He had a just plain awful season in Urban Meyer's disinterested final campaign. Ole Urb simply didn't have the energy to avoid sticking Brantley's square peg into Meyer's offensive round hole.

He managed 9 touchdowns in his first full season as a starter a year after putting up 7 in spot duty as Tebow's cleanup hitter. Couple that with his 10 interceptions and the Gators 77th ranked offense, needless to say his quarterbacking left a lot to be desired.

However, it's a new day in G-Ville. The Urban Legend's Spread/Option offense is kaput and in its place is Charlie Weis' Pro style attack. Yes, the same coach that helped make Tom Brady a household name, paved the way for Brady Quinn and Jimmy Clausen to reach the NFL and saw Matt Cassel go to his first Pro Bowl.

Instead of the constant shotgun that stunted Tebow's pro prospects and hurt Brantley's ability to use his God-given talents, the quarterback will work with a traditional two back (with a fullback), two tight ends and two wide out sets.

Jeff Demps and Chris Rainey will man the Gators running game. Trey Burton will likely move to FB full-time and Mike Gillislee may finally get some quality reps.

The Gators' receiving core will be led by the stone-handed Michael Clayton clone Deonte Thompson. Andre Dubose and Omarius Hines will compliment him with Jordan Reed moving over from QB to TE. Keep an eye out for highly recruited freshman wide out Ja’Juan Story and TE A.C. Leonard. Unfortunately, Leonard tore a meniscus in his knee during practice and may medically redshirt (although the Gators may just wait the 6-8 weeks of recovery time).

Where the Gators are most vulnerable is on the front line. Florida lost four from their offensive line to graduation leaving them pretty thin. Add to that a light recruiting class in regards to the o-line and it gets downright scary. Junior Xavier Nixon moves over from right to left tackle while senior transfer from Notre Dame Dan Wenger will man left guard, RS Sophomore Jonotthan Harrison at center, RS Sophomore Jon Halapio at right guard and RS Junior Matt Patchan at right tackle. 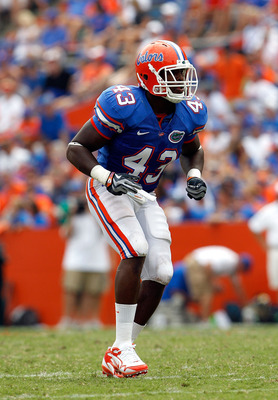 Like the offensive line, the Gators defensive line depth was depleted by attrition and Florida finds itself scrambling for quality starters on the front. Luckily for them, Head Gator Will Muschamp and his defensive coordinator/d-line coach Dan Quinn specialize in bringing the best out of their front line.

They can start with underachievers DT Omar Hunter and DE William Green, neither who have lived up to the promise of their high recruitment statuses. Redshirt Senior Jay Howard is back, as is former 5-star recruit Ron Powell, who will be sort of a hybrid DE/OLB this year.

Jon Bostic mans the middle of the Florida defense, hoping to build on his 57 tackles, 1.5 sacks and 3 interceptions from last season.

Jelani Jenkins hopes to build on his Freshman All-SEC campaign at will linebacker while RS Junior Lerentee McCray will move in on the strong side.

When Janoris Jenkins was kicked off the squad after being arrested for the third time and created a gaping hole in the Florida secondary. The Gators hope that Jeremy Brown, a redshirt Junior, can rise up and fill the void.

Like the D-line, the Florida secondary had its share of defections to the NFL. Pressed into duty at FS is Junior Josh Evans, a solid contributor last season. Matt Elam steps into the very large shoes of former team leader Ahmad Black. While Black was a hard hitting, ballhawking force Elam certainly brings his own bag of tricks to the table.

The battle continues at the corner spot opposite Jeremy Brown. Moses Jenkins, a redshirt Senior, may finally get his shot to show everyone what he can do, although incoming freshmen Marcus Roberson and De' Ante Saunders have been pushing Jenkins and either could beat him out. 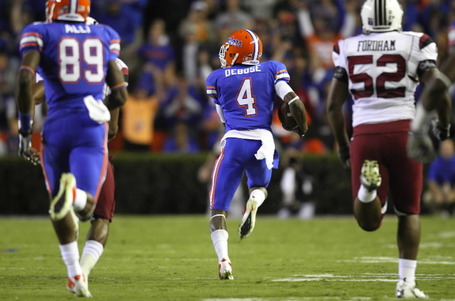 Florida's return unit is in good hands with Andre Debose, who returned two kicks for touchdowns last season and was named the Nation's top returner.

Caleb Sturgis returns to man Florida's place kicking duties while freshman Kyle Christie will get the first shot at replacing Chas Henry as the punter. David Lerner will also compete for the punting duties. 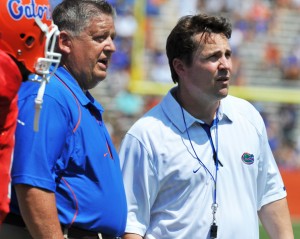 Rather than promote a Meyer clone, Florida Athletic Director Jeremy Foley looked to replace Meyer with a young, energetic coach who could inject some new life into the program.

Enter Will Muschamp. Muschamp, who grew up in Gainesville, was defensive coordinator and coach-in-waiting at the University of Texas. After a long history of great defenses and superior talent cultivated and shipped off to the NFL, Foley tabbed Muschamp as the perfect ying to Meyer's yang.

To the great rejoice of many in Gator Nation, Muschamp did not retain offensive coordinator Steve Addazio, who took over as head coach at Temple. Enter former Notre Dame head coach and NFL offensive guru Charlie Weis.

With a pedigree as long as your arm, no one questions Weis' ability to coach the offensive side of the football.

Florida recruiting coordinator and wide receivers coach Aubrey Hill found himself smack dab in the middle of the Miami scandal. Hill allegedly took part in the shenanigans that went on in Coral Gables.

Its the SEC, silly. As long as the Gators continue to play in the Southeastern Conference, Florida will face a difficult schedule. After getting through the sacrificial lambs (FAU and UAB), the Gators host fallen rival Tennessee, then head out for their annual bashing of Kentucky before slipping into the meat of their schedule.

If Florida can make it through the gauntlet of Alabama, LSU and defending National Champion Auburn, they still have to get through media darling South Carolina and host that that team from up north.

If they make it through all of that, they still have to play the SEC Championship game and the BCS Bowl.

Its no wonder Florida State doesn't want to leave their basketball conference.

Many pundits are limiting the Gators to just 8 wins (with some going as far as saying Florida may be as bad as 6-6), but I see a Florida team that's ready to recapture some of its previous glory.

John Brantley should be much better in an offense suited to his skillset, Muschamp knows defense so you know the Gators will be one of the better defenses in the nation.

With a good defense, strong running game and a quarterback with the desire to prove his critics wrong - this Gator team is lying in the weeds and getting ready to surprise a lot of folks.