Avery Young, a consensus Four-Star recruit, has committed to the Auburn Tigers, announcing the news on television on National Signing Day 2012. Young, who played for Palm Beach Gardens, chose Auburn over Miami, Alabama, Florida and Georgia, the four other finalists for his services. 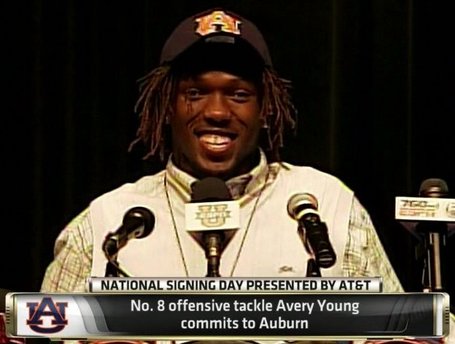 During his announcement on the National Signing Day special on ESPNU, Young said, "Everything about Auburn fit me real good. I was raised in the country, so there's a little city/country mix ... they made sure I felt like I was at home."

Young had zeroed in on Auburn on National Signing Day after also considering Georgia and Miami. The lineman felt that the school best matched his personality and provided his greatest chance for success.

Young was the 12th-highest offensive lineman in the Rivals rankings. He joins an Auburn squad that will look to groom him into one of the nation's top linemen.