Share All sharing options for: Florida Gets Invaded By Texas A&M Billboard

Give Southeastern Conference neophytes Texas A&M Aggies this much credit: they aren't shy in the least bit. Actually, the Aggies are brazen, annoying as hell, and any other superlatives you could apply to an opposing fan base that lingers like the smell of a silent fart.

Don't believe me? Just take a look at this "invasion billboard" some sort of Aggie affiliate dropped by Florida after putting it in Austin just to get on the nerves of the longtime rival Longhorns. 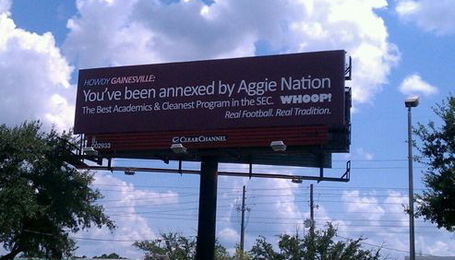 Yep, that's right, Gator Nation. According to this billboard in northeast Gainesville, you've been annexed by Aggie Nation. And not just that, but we're talking about the alleged "best academics and cleanest program in the SEC."

Self righteous enough for you? Hope so.

Aside from that last line and the signature of 'Real Football, Real Tradition' being empty rhetoric, this is close to brilliant from the Aggies. It's brash, rude and ridiculous on so many levels. Forget about their football team not being good enough to measure up to SEC competition, as so many believe to be the case.

Judging from this, Texas A&M's arrogance is so SEC-ish. This is going to be fun.

***Note: Texas A&M Marketing and Communications Vice President Jason Cook sent out an email in regards to the billboard with the following statement:

"This billboard was not placed by Texas A&M University, and it is certainly not reflective of how we have handled our transition into the SEC. We are investigating aggressively, as we believe that our institutional trademarks have been infringed upon. Texas A&M has tremendous respect for the University of Florida, and we look forward to hosting the Gators in our first SEC football game this weekend."