Should the Marlins go crazy with the free agent market this year? It depends on what their ultimate goal is -- and what price they are willing to pay.

The Miami Marlins unveiled their new uniforms and new logo last Friday, but do they have a chance to chance to unveil a new team in the 2012 season?

Well, the Marlins 2012 roster promises to be a little different from their 2011 offering, but how different we do not know. Apparently, everyone from the owner to the GM's assistant's assistant has been courting Albert Pujols and Jose Reyes like crazy, last Friday reportedly making "substantial" offers to duo.

Owner Jon Florida said at the uniform unveiling: "If our ballpark could speak, it's first words would be, 'Hola! Miami!'" The leadership has made no illusions about their intentions to identify with the Latin communities in Miami and internationally, and their pursuit of Dominican Republic-born Albert Pujols and Jose Reyes suggest they are trying to make themselves a destination for even Latin players.

But first things first: Can they win?

Then again, some things went really well for the Marlins: Javier Vazquez had an amazing bounce-back year, pitching nearly 200 innings of 3.69 ERA ball. Also, the young trio of Logan Morrison, Mike Stanton, and Gaby Sanchez stayed healthy and productive. And Emilio Bonifacio -- playing shortstop most of the year -- finally put together some on-base skills and became an offensive weapon.

Altogether, though, losing the best two players on the roster for most of the season had a pretty considerable negative effective on the Marlins. Good luck and bad luck mixed together to make the 72-win team, but there was certainly an extra dose of the bad.

So, if the Miami Marlins just stayed with the team they have, making only minimal changes to the roster, how many games could they win in 2012? And what if they sign the free agent behemoths of Albert Pujols, Jose Reyes, and Mark Beuhrle?

Using Sky Kalkman's WAR Calculator, we can estimate the team's win total within a reasonable range. The two major stats we will need for this will be WAR -- wins above replacement -- and wOBA -- weighted on-base average.

WAR and wOBA (feel free to skip this section if you know these stats already)
WAR is the all in one stat that simply tells us how many wins an individual player adds relative to a run-of-the-mill minor leaguer. In other words, WAR tells us the difference -- in wins -- between Mike Stanton and journeyman outfielder Chris Aguila. WAR adds together all elements of the game -- hitting, fielding, base-running, and pitching -- to produce a single value in wins. For the remainder of the article, I will typically say "wins" to refer to WAR.

In many ways, wOBA is just Awesome Batting Average. For over 100 years, batting average has been a severely flawed stat -- it says all hits are equal and worth precisely 1 point towards the average. On the other had, wOBA merely weights each hitting event -- singles, doubles, triples, homers, unintentional walks, and hit-by-pitches -- according to how many runs the event produces. So, in effect, wOBA is like batting average plus a more accurate RBI stat (because RBIs rely too heavily on context and where a player is in the batting order).

For WAR, an average starting-quality player will be worth 2.0 wins through a full season. An above average player ranges from 2.0 to 4.0 wins, and All-Stars will typically be worth upwards of 5.0 wins.

Two Scenarios
So let's imagine two different scenarios: The Gray Scenario, where the team maintains its roster and fills holes with internal solutions, and the Festive Orange Scenario, where the team pushes its payroll near $90M or more and signs Albert Pujols, Jose Reyes, and Mark Beuhrle -- and then trades Logan Morrison and prospects to the Tampa Bay Rays for Wade Davis and prospects -- and then signs Cuban defector and center-fielder Yoenis Cespedes.

Here's how these two scenarios play out: 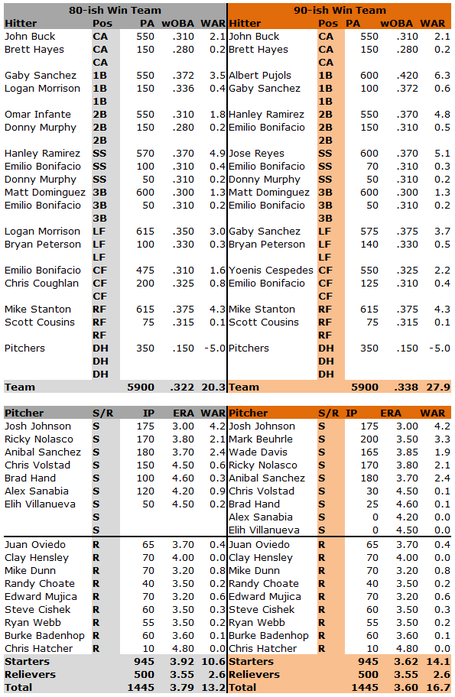 The Gray Scenario -- which is optimistic about catastrophic injuries as well as Josh Johnson and Hanley Ramirez's abilities to return to elite levels -- sees the Miami Marlins, in a perfect world, winning 82.0 games -- a nice improvement over 2011, but not good enough for anything better than third in the NL East.

The Festive Orange Scenario improves the team by over ten runs, putting them in the 93.1-win zone. Again, this all assumes a lot of good things: Gaby Sanchez can play left field (though I've assumed in my calculations that he's a butcher defensively); Albert Pujols, Jose Reyes, and Mark Beuhrle show no signs of aging; and Wade Davis transitions wells into the NL.

At 93ish wins, the Miami Marlins may not be able to beat the Philadelphia Phillies for the NL East crown, but they should have a decent shot at the 2012 NL Wild Card spot, which the St. Louis Cardinals were able to win last year with 90 wins.

Typically, being in 90-win territory is enough to qualify for the postseason, so crossing the 90-win barrier is what the Marlins brass needs to aim for. Last year, only one team with 90 or more wins did not make the playoffs -- the historically-collapsed Boston Red Sox.

And that's the major caveat. The Marlins, assuming they indeed do have the spending capacity to execute such impressive signings, would be positioning themselves in a rather precarious long-term situation.

Conclusion
Pujols may finish his career like Frank Thomas or Barry Bonds, crushing the ball to the bitter end, or he might peter out in his mid 30s like the majority of similar sluggers do. And judging by the contract rumors surrounding Pujols, it's possible his next contract takes him into his 40s.

Meanwhile, Reyes may be this year's Carl Crawford -- a free agent position player coming off a career year. Crawford had a down year in 2011, but even if he rebounds in 2012, a return to his career norms might still make it difficult for him to be worth his contract.

Beuhrle, on the other hand, seems to defy age and year-in and year-out be the same player. However, the Chicago White Sox -- his former team -- are famous for their unusual ability for keeping pitching staffs healthy. Could Beuhrle, who will be 33 next season, be at greater risk away from the White Sox medical staff? It's hard to say.

Ultimately, it depends on whether the Marlins are willing to make the Big Bet. Their pitching depth behind Anibal Sanchez may be stronger than it appears on the surface, but it is not probably deep enough for the Marlins to sustain more than one major injury. And the outfield does not particularly have prospect banging on the door, so an injury to Mike Stanton could potentially hamstring the outfield offensive output.

And even if the teams stays healthy all year, there is always a range plus or minus 6ish wins when it comes to a full season -- so even if they have 93-win talent, they may still have an 85- or 87-win team.

So should the Marlins do it? It depends. If I'm the Marlins, probably no. I like long-term sustainability. I like building from the farm up. I like avoiding the premiums of the free agent market. (That being said, I think the Marlins should pursue Yoenis Cespedes at all, er, most costs.)

But if the Marlins want to establish themselves as a mid-market team, if they want to become a destination for Latino/Hispanic free agents, if they want their new persona to be seen and seen prominently and seen now, then there's no better way than to corner the market on free agent talent and add something else to the new uniforms, new logo, and new stadium -- new hope.