The Florida State Seminoles have done it again, dropping the No. 4 Duke Blue Devils, 76-73 on a buzzer beater from Michael Snaer. In a winner-take-first-place for the ACC, this electric game saw almost a dozen occasions that the game was tied. This is the fifth of seven top-5 teams the Seminoles have taken down.

On their final possession, Duke gave the ball to the NBA bound Austin Rivers, who sank a two and tied things up 73-73. With 4.9 seconds remaining, senior Luke Loucks got the ball to Michael Snaer after the in-bound, and Snaer bravely put up a three, the only open shot. The ball took a huge arc, and the cold blooded three-pointer was good! Florida State won 76-73, stunning the Duke Blue Devils, who were ready for overtime. 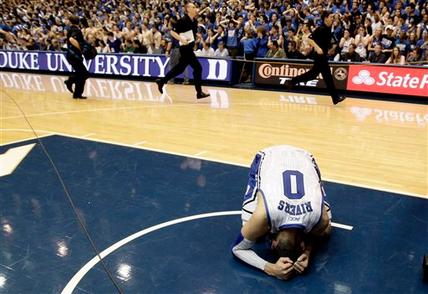 Things first got interesting as the clock ticked past 12:00 remaining. Ian Miller and Deividas Dulkys dropped threes to keep pace with Duke, which tied the game at 47 and 50 respectively. Just by watching, you wouldn't have known the Seminoles were unranked, they looked dominant - but nothing can stop the energy in Durham. Duke stole the ball, ran down the court, and two players went flailing through the air trying to get the ball to go in or force the foul. They did both, then Duke forced another turnover. The normal defensive savvy Seminoles were on the ropes.

Coach Leonard Hamilton calmed things down with a timeout and the Noles put things back together, going on a 7-3 point run. Coach K saw a threat and called his own timeout accordingly with 6:44 remaining. From that point, the game was tit-for-tat until Florida State tied the game 69-69 with 1:22 to go.

Michael Snaer missed a much needed layup for the Noles, but the former McDonalds All American redeemed himself, giving the lead for FSU 71-70 and 0:52 on the clock, their first in over fifteen minutes. Exchanged fouls brought the score to 72-71, still Florida State's lead. With 0:23 remaining, FSU called a timeout and Duke was desperate to foul and regain possession. Duke tried to foul Snaer, but had to settle on Xavier Gibson, a 67% shooter from the line. He had hit 6-of-6 on the night, but only hit 1-of-2. FSU led 73-71 and Duke took a timeout with 0:14. From there, Rivers hit the two for the tie before Florida State won as time expired. Credit is due to Loucks on his great vision down the court. His passing game set the Noles up for victory this afternoon.

Ryan Kelly deserves a tip of the hat for Duke. Without scoring any points in the first half, he had 10 points off the bench with three steals and four rebounds. Kelly also drew four costly fouls in the game, though. The other Blue Devil making himself known on the court was Rivers, the son of Celtics Coach Doc Rivers. Despite his 19 point show, it was Rivers who missed a 3 to put Duke ahead with 0:50 remaining, which could have put the game out of reach.

The dominant player on the court for Florida State was Bernard James. His physical game shook the Duke mentality, but again, Snaer is certainly the hero. Xavier Gibson led scoring for the Noles with 16 points and had three blocks. Snaer followed with 14, while Dulkys and James had 12 a piece.