Michael Snaer shocked Virginia Tech in a game the Seminoles should have lost.

Share All sharing options for: Reflections on Florida State's Thriller Over Virginia Tech

Florida State's thrilling comeback to defeat the Virgina Tech Hokies was one for the ages.

Have you seen this video??

Honestly, have you watched it?

This is the reason why I love college ball. You hold out for these moments:

Like I said, one for the ages. Not necessarily in the best way, though.

The Seminoles had checked out of the game, down by 15 points and shooting a little over 35%. Poor luck made sure that shot after shot bounced out from the inside of the rim and keep the scoring low. The Hokies were no better, they hovered most of the game at 33% accuracy, but they steadily krept ahead in the second half.

I was at the game and following the stats on my phone. Sometimes ignorance is bliss, I'm not sure knowing the stats made me any more happier watching it happen. Looking back, you can see how my nerves stayed on edge. In nostalgia, I spent a good five minutes staring at the Game Flow this morning asking, "How did this happen?" 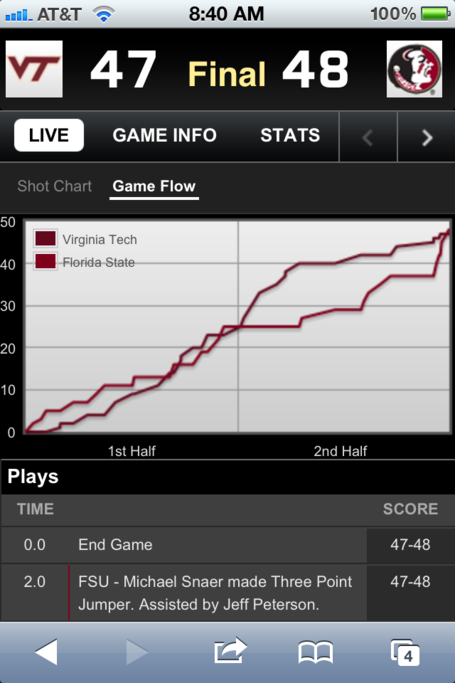 Florida State was sure to lose and fall from the rankings. The game seemed like a waste of precious studying time. The wins over Duke and UNC potentially meaningless. I was ready to pull my hair out. Even still, I leaned over to my friend Jason and said, "If the Noles come within nine, we have a chance." Well, the Seminoles were only down by 9 for the last 5 minutes and nothing was going in - yet they still won. Call it the spirit of the Unconquered, you can call it a lucky shot - I'll call it Jeff Peterson... You'll see.

I can honestly say there was no confidence on the floor to shot the ball. When Florida State was on offense, the Noles could not break the zone. Players waited for their shot to come, but the offense was not swinging the ball around the outside. If they did, it was two passes then a weak attempt at hitting the seam on the way to the net. It wasn't very effective.

The Hokies had a similar issue. In the first half, their zone was predictable to the exact formation. Given both teams' apparent inability to score, it was a close game. Then Virginia Tech made their adjustments at the half. Their defense didn't change, but their offense ran scheme after scheme that the defense wasn't ready to follow. The Noles had no idea what to do with guard Dorenzo Hudson, throwing FSU off their groove and let his team mates score.

Coach Leonard Hamilton had to pull the starters for the majority of the second half after playing most of the first, so Deividas Dulkys and company weren't out there to use fast feet like they normally would. The team turned to Ian Miller and Jeff Peterson to get things done. Not the starters, but talented guys. Miller led the team in scoring with 11 points (yeesh), and team leader Michael Snaer was active on the court with 9 points and the game winning three, but it was Jeff Peterson who put the team on his back.

The highlights won't show you this, but with about 10 or 12 minutes remaining, when the wind had fallen out of the Seminoles' sails, Jeff Peterson stepped up. Grabbing rebounds and taking passes, he hustled down the court until he made something happen on every Seminole possession for the last fourth of the game. When your team is having a bad game, you need someone like Peterson off the bench to fire up the team and make things happen. He finished the night with 5 points, but his three point shot with 1:13 remaining gave Florida State their chance. The Noles had not scored in over 4 minutes as the clock was ticking away, down by nine before that shot.

Peterson assisted Miller on a three to bring the game within two, then Michael Snaer did his best impression of his winning shot over Duke earlier this year, and the uncontested three sank. The remaining 2.5 seconds were a moot point, and the Hokies walked away dejected. Not because they'd played any better than Florida State, the Hokies finished the night having made 32.7% of their baskets, but because free throws killed the game. VT had every opportunity to bury the Seminoles, but instead went 7-16 from the free throw line - and only 2-9 in the last 2 minutes. FSU didn't win this game, Virginia Tech lost.

Florida State has to turn things around. The next opponents are NC State and Duke, 7-4 and 9-2 in the ACC respectively. They played each other in a thriller last night that saw almost 150 combined points scored, in Duke's home court. We will have to beat down the zone on offense, and somehow find confidence in shooting the ball. FSU stands 9-2 in the ACC themselves, along with UNC and the aforementioned Duke. It's still a tight race, and the Seminoles stand a chance, but with 5 games remaining the Noles need to light it up.