Dwyane Wade was making eyewear a statement again on Tuesday night, following the Miami Heat's win in Game 4 over the Oklahoma City Thunder. Gone were the hipster specs with no lens. Instead, Wade hearkened the 1990s, the high point of slacker culture and boisterous sweaters. Wade's choice in glasses on Tuesday night were an homage to a semi-popular television character with a similar name: Dwayne Wayne from Cosby spin off A Different World. 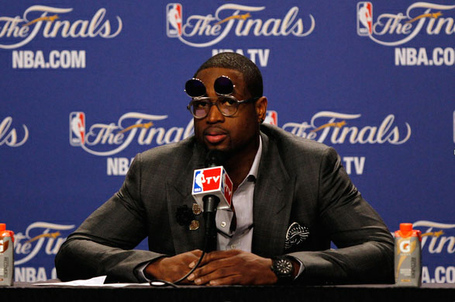 Just how much of an homage were the flip shades? A direct nod, a carbon copy, it was enough to make you wonder if he called the wardrobe department at Columbia television to get his hands on the glasses. 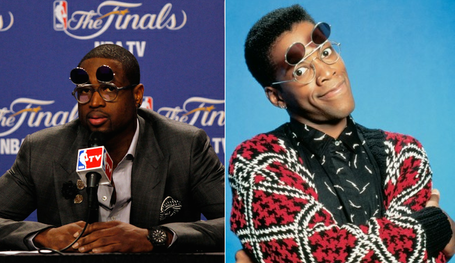 Flip glasses are little like a fanny pack, in that nobody should be seen in them, not these days. At least Wade had the decency to wear them with a sharp suit and not Wayne's loud, bulky cardigan and woefully 90s lightning print shirt.