When dealing with big sporting events like the 2012 NBA Finals between the Miami Heat and the Oklahoma City Thunder, one always has to be on the lookout for counterfeit tickets. You have to be especially careful in a state like Florida, where scalping is legal.

But... who needs to worry about buying fake tickets or even making fake tickets when you can just create fake media credentials like Broward county couple James and Ruth Kauff.

According to the arrest reports, arena security called Miami Police after stopping the couple at one of the many ticket checkpoints inside the arena during the June 19 game.

The report said the Kauffs each had a phony media pass that read "Media Miami Heat" and had their photos pasted on the cards.

The couple were also found with a clear plastic bag containing 13 pills of oxycodone, according to the arrest report.

So yeah, these two certainly do look like they are members of the media. 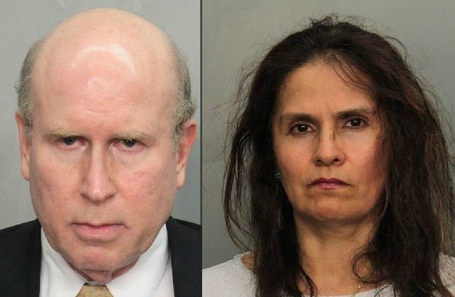 No, I'm serious. They totally look like sports media.