In April, the University of South Florida announced plans to renovate the Sun Dome, the multipurpose athletics and convocation facility that opened in 1980. Now, Ken DeCelles, the manager of SB Nation South Florida Bulls blog Voodoo Five, points out a rendering of the proposed renovations is available on the school's website; you can find it on page no. 3 of the current projects PDF file.

The renovations include a center-hung scoreboard, as well as a concourse offering concessions and restroom access. Below the jump, an artist's rendering of what the new interior of the Sun Dome will look like: 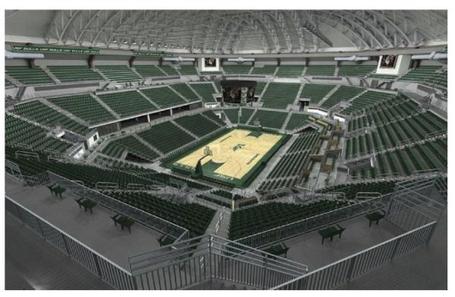 DeCelles calls the image "ridiculous," but in a complimentary way. His only complaint is the lack of gold in the current color scheme, though some commenters are less enthusiastic. "We don't need seats wall to wall," says one. Another recommends covering the exposed concrete on the third level with "a stylized bulls graphic."