ESPN deeply confused about what Fred Taylor looks like

ESPN aired a high school football game between Yulee and Glades Day that featured Fred Taylor's son, Kelvin Taylor. Taylor was presumably at the game, but the man ESPN showed on the sidelines clearly wasn't him.

ESPN aired a high school football game on Friday featuring Kelvin Taylor, the son of former Jacksonville Jaguars standout Fred Taylor. Taylor was in attendance at his son's football game, but ESPN apparently didn't have time to find him. Luckily, they found at man who were capable of standing in for Taylor on short notice. 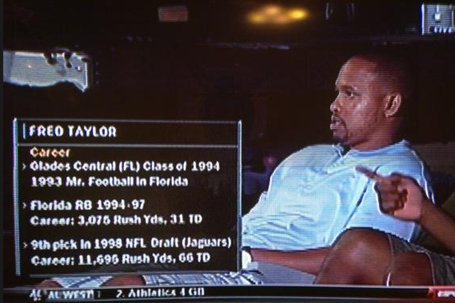 That's him there (via @GuysGirl). It's not clear who he is, where he was in the 1998 NFL Draft or how many career yards he racked up, but we do know he's not Fred Taylor, he wasn't the ninth pick in the 1998 NFL Draft and he didn't end his career with 11,696 yards, the 15th highest total in NFL history. Those honors belong to Fred Taylor, who they did eventually find and show.

The game was between Yulee and Glades Day, and featured two highly-ranked running back prospects: Taylor's son Kelvin and Yulee running back Derrick Henry.