When we discussed the Buccaneers season in our preview, we talked about how important it would be for the team to get off to a good start. The Bucs have the opportunity to do just that if they can beat the winless Indianapolis Colts in front of a television audience.

For the Bucs, its a chance to show the nation what a lot of us in Tampa Bay already know. These youngry Bucs are pretty darn good.

It's an important game for the Bucs - as it they'll be playing in front of their first sell out crowd since 2009 allowing Buccaneer fans to see the game locally. Its their opportunity to re-ignite a stagnant fanbase and introduce them to the new cast of characters.

While certainly not what they were in their hey day, the Colts still provide a threat with Robert Mathis and Dwight Freeney. The duo have combined for all five of Indy's five sacks this season. The Colts did take some losses on defense due to injury, losing MLB Gary Brackett and S Melvin Bullitt. That will certainly cause a little more discomfort for the 18th ranked pass defense in the NFL.

Josh Freeman, while spectacular at crunch time, still hasn't put the full package together yet this season. He's thrown 4 interceptions (after throwing just 6 all of last season), only two touchdowns and has found his starting receivers and tight end only 30 times in 56 attempts for 290 yards and two touchdowns.

Mike Williams and Regus Benn have yet to make an impact but Freeman hasn't exactly been accurate with his passes, although he is completing at a career high 68% clip.

The Bucs are ranked 21st in their passing game.

While he hasn't had that breakout game yet this season, LeGarrette Blount remains one of the most dangerous backs in the league. He powered the Bucs to victory on the final drive of the game against Atlanta and sparked the offense from the dead with two touchdowns against Minnesota.

On the season, Blount is averaging 4.0 yards a carry and has rushed for 167 yards and two touchdowns.

Indianapolis has struggled a bit against the run, surrendering an average of 113.3 yards a game, although they did a much better job last week against Pittsburgh. The Colts held the Steelers to just 67 yards (2.4 yards a carry).

They'll need that type of performance against Blolunt and the Bucs if they hope to stay in this football game.

The Colts are ranked 22nd against the run. 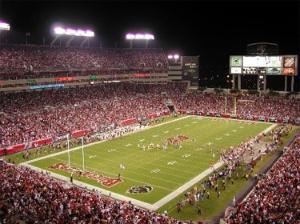 It hasn't been a banner year for the Buccaneers' pass defense, which is ranked 23rd in the NFL. Still, the Bucs' pass rush showed some life last week as they got tremendous pressure on Atlanta QB Matt Ryan, bringing him down 4 times in the contest.

The Goat (Greatest of all time) Ronde Barber showed he still has it picking off a pass and making some big time plays aganst the run. Aquib Talib is off to a slow start in the Bucs secondary, which will be dealing with the loss of Cody Grimm for the season to a knee injury.

Kerry Collins is out with complications from a concussion sustained last week against the Steelers putting the passing game on the shoulders of career backup Curtis Painter. The Colts weren't happy with Painter in the pre-season, electing to bring in Collins to try to bridge the gap until Peyton Manning could return.

There's still plenty of weapons in the Colts arsenal, including Reggie Wayne and Pierre Garcon.

Painter was a little shaky against the Steelers and has completed just 45.5% of his passes while missing some big play opportunities. As a team, Indy is 27th in the league in passing.

Joseph Addai remains a dangerous back but because the Colts have found themselves behind in games, they haven't had time to get him established. Last week, playing close with Pittsburgh, they got Addai the football 17 times and he responded with 86 yards and a rushing touchdown. On the season, the Colts rank 21st on the ground.

Tampa Bay's much maligned run defense was lights out against Atlanta last week. Super runner Michael Turner was humbled to 20 yards on 11 carries. The big time performace raised the Bucs from the cellar of the league's run defense rankings to 23rd.

Tampa Bay's place kicker Connor Barth is perfect on the season, 6-for-6 in field goals with a long of 49. Michael Koenen has been sensational for Tampa Bay as a punter (averaging 47.8 yards a punt with 3 inside the 20) and a kickoff specialist (opponents averaging just 15.0 yards a return on kickoffs and 7 touchbacks).

Preston Parker is the Bucs kick and punt returner. He's averaging 23.5 yds in kick returns and 14.0 yds a punt return.

Veteran clutch kicker Adam Vinatieri continues his amazing career with the Colts. This season he is 6-for-7 with a long of 52. Pat McAfee is the Colts punter, he's averaging 47.1 yards punt.

Joe Lefeged is the Colts kick returner. He's averaging 23.6 yards a return. Blair White has the only punt return of the season for the Colts, he took it 2 yards

Jim Caldwell is in his third season as head coach of the Colts, he's amassed a 24-11 record and is 2-2 in post-season play.

Raheem Morrris is in his third season as head coach of the Bucs, he's 15-20 and his team has no playoff appearances.

Josh Freeman and company make their national television debut on ESPN's Monday Night Football. It will certainly be a wild night for the Bucs fans as Super Bowl winning head coach Jon Gruden will make his return to Tampa Bay as a broadcaster for ESPN.

The Bucs get a Colts team that was game against the Steelers and believe in their young QB Curtis Painter. Defensively, the Colts stymied the vaunted Pittsburgh running game and forced Super Bowl MVP QB Ben Rothlisberger into several mistakes.

Still, the Colts are without Peyton Manning, making this a winnable game for the Bucs - one they must have. The Bucs will be at home with a sold out crowd behind them - they should have plenty of incentive to put the Colts away.

Knowing the Bucs, they'll let the Colts dangerously hang around for awhile but Painter will make the mistake that salts the game away for Tampa Bay.