A Team And Its Community: Still A Great Fit

When teams and communities work together, great things happen.

Share All sharing options for: A Team And Its Community: Still A Great Fit

This week, the sports talk in the Tampa Bay area has been dominated by an issue that really has nothing to do with what takes place during a game. Specifically, the talk has been about attendance, or rather the lack thereof, but that's just skimming the surface. At the real root of the issue are the fundamental twin questions of what exactly is a community obligated to provide a professional sports franchise in the way of "support" and what is that team obligated to provide in return. What is the reasonable expectation of what is "owed" by whom to whom? Everywhere you turn, it's seemingly the only thing anyone is talking about, from the media, from the fans and local merchants, from the players and coaches and from pundits far away who wouldn't seem to have a stake in the matter. Even people who don't pay attention to sports have expressed an opinion. Some of the talk has been quite nasty in tone. A lot of it stings. None of it is fun. There's an air of bitterness and rancor, which is unfortunate at a time when there's so much to celebrate in the Tampa Bay sports scene. Of course, contentious relationships between teams and communities are nothing new. Like any relationship, there will be good times and bad. In between, if all parties involved care about each other enough to work together for the benefit of the greater good, things generally work out that way for the most part.

Evidence of the kind of relationship you want to see between a team and it's community was on display at the St.

Pete Times Forum the other night, during Ice Fest 2010, the Tampa Bay Lightning's annual open house event for fans. A featured part of that event was a charity hockey game between Lightning alumni and members of the Tampa Police and Fire Departments in honor of fallen Tampa Police officers David Curtis and Jeffrey Kocab who were killed in the line of duty this past summer. Team Red, comprised of Tampa Firefighters with help from Lightning alumni Doug Crossman, Brian Bradley, Chris Dingman, Enrico Ciccone and Lightning CEO Tod Leiweke defeated Team Blue, a team of Tampa Police officers plus Lightning alums Dave Andreychuk, Stan Neckar and John Tucker by a score of 10-4. Tampa mayor Pam Iorio was on hand for a ceremonial puck drop, flanked by Kelly Curtis and Sara Kocab, the fallen officers' widows who wore their husband s' badge numbers on pink Lightning sweaters. There was a color guard, a moment of silence and then a hockey game, highlighted by some surprisingly good play, particularly by firefighters David Vinciguerra and Dusty Rousseau as well as the fancy goal scoring touch of Enrico Ciccone that I had apparently forgotten. About $14,000 was raised for the Curtis/Kocab memorial fund during the event. It was both touching and entertaining, exactly the kind of spectacle that's not uncommon in the world of sports and that you're not liable to find elsewhere. Lots of corporations step up and pitch in when tragedy strikes a community, but few are able to put on an event that draws a large crowd together like a sports team can. As Lightning alumni Brian Bradley, the team's first-ever all-star, said

"It's an honor to participate in an event like this. We're in awe of these guys. We all live here. This is our community too. These are the firefighters and police officers who keep our homes and families safe. So for us, it's less about 'giving back' than it is about being 'a part of'."

That's a perspective we - meaning all of us - should keep in mind before we start pointing fingers and talking about embarrassment, disappointment and casting blame about who is or isn't meeting their obligations. 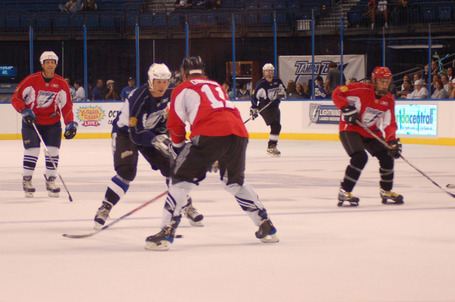 (All photos by Renee Warmack)