The Tampa Bay Lightning Have A Horrible Defense

The Tampa Bay Lightning have struggled in recent weeks, losing four of their previous five games. What's the cause? Their defense.

Share All sharing options for: The Tampa Bay Lightning Have A Horrible Defense

As the Tampa Bay Lightning have struggled in recent weeks, Bolts fans have searched around for any sort of possible scapegoat. It's Dwayne Roloson; he's finally gotten too old. No, wait, maybe it's that the Lightning aren't playing with enough intensity and hustle. Or maybe they need to communicate better.

But in the aftermath of the Lightnings' 7-1 loss to the Toronto Maple Leafs, it's become impossible to ignore the truth any longer: the Lightning have a poor defense. They have now allowed 67 goals on the season, fourth worst in the Eastern Conference and tied for fifth worst in the entire NHL. If they were to stay on this pace for the entire season, they would allow a total of 274 goals -- a total that would have put them second worst in the NHL last season ahead of only the Colorado Avalanche (288 goals against).

Is goalie Dwayne Roloson to blame? He's an easy scapegoat, and people are naturally suspicious of him since he's 42 years old. His save percentage has dipped below .900 (.898 SV%), his poorest save rate since 1999, and his goals allowed average is the highest it has ever been (3.16 GAA). But when you look at the goalie statistic that is most indicative of skill -- even strength goals allowed -- Roloson has been as dependable as ever. He's been the 10th best goalie in the NHL this season at even strength (2.65 GA/60), but he's been the eighth worst goalie in the league in power play situations (9.57 GA/60).

These stats suggest one thing: Roloson is still a good goalie, and his skill level will shine through if given enough time. But in power play situations, the Lightnings' defense is doing a horrible job at helping him out.

Is this poor defense a result of a "lack of hustle"? Personally, I get frustrated when people fall back on "hustle" as a catchall reason that explains all a team's woes. These are professional athletes we're talking about; while hustle certainly has a large impact in hockey, I find it hard to believe that these players are simply choosing not to try. Choosing to coast. Choosing to lose.

Yes, I know Guy Boucher has called out players for not hustling recently. I'm not saying it's had no effect, but simply that I don't think it explains all the Bolts problems right now. To simply harp on that alone is misleading.

So if the Bolts' problem isn't Roloson and it's not hustle -- or at least, it can't entirely be explained by hustle -- it can only be one thing: the talent level of the defense. And really, this should come as no surprise.

Even thought the Lightning made it deep into the playoffs last season, they didn't have a dominant defense. They allowed 240 goals over the season -- ninth worst in the NHL -- and Lightning didn't do much this offseason to improve their defense. They signed Matt Gilroy to a one-year deal, but he was the only outside defensive player brought in; for the most part, the Lightning were content with resigning their current players and going with the "If it ain't broke, don't fix it" strategy.

The only problem with this strategy is that sometimes things decide to break themselves. The Lightning don't have much defensive depth, and thus far they have been hit with key injuries. Mattias Ohlund has been out the entire season with a knee injury, and Victor Hedman was injured as well for a number of games. When a below average defense loses two of its key players for extended periods of time, the results are not going to be pretty.

To make matters worse, the Lightning don't have as much room for error as people assume. Consider: last season they made the playoffs with 103 points, yet only had a +7 goals differential. 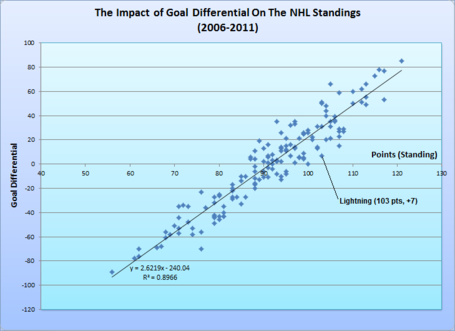 Of all the teams to reach 100 points or more in the standings over the last five seasons, the 2010-2011 Tampa Bay Lightning were only the second team to have lower than a +13 goal differential. The Lightning had a +7 differential, and most teams with similar differentials finished with point totals in the low 90s. It was an outlier season for the Bolts.

Outliers like this aren't uncommon in hockey, though, as teams can rack up a high point total with a poor differential by winning (and losing) lots of close games. But there is definitely a very strong relationship between a team's goal differential and their success. 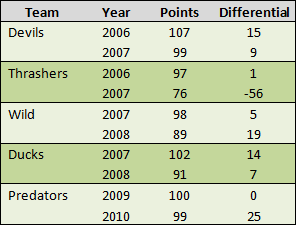 This is far from a scientific study, but the general trend holds: if a team reaches a high point totals with a low goal differential in one season, they are likely to regress the following season unless they increase the talent level of their team (or in the case of the Wild, even if they improve). Most of these teams didn't fall far, though, and the Wild and Ducks look like good examples of what could happen to the Lightning this season.

The Lightning currently have a -12 goal differential, the worst total in the Eastern Conference outside the Islanders and Hurricanes. That will surely improve as the season goes along -- Ohlund can't return quick enough at this rate -- but by how much? Will the Bolts' offense be able to compensate for their poor defense? Their defense is looking worse than last season, so unless their offense begins to pick up the slack, the Lightning are looking like a 90 point team at best.

Should the Lightning look to make a trade for a defender? That's a question for another day, but if I were Steve Yzerman, I'd be putting out feelers to other teams to see what sort of talent might be available. One way or the other, the Lightning need help on defense. And if they don't get some soon, this season could be more frustrating for fans than anticipated.