Share All sharing options for: Today In "Depressing Thoughts For Lightning Fans"

As a Tampa Bay Lightning fan, this has to be one of the most depressing things I've seen in a long time. 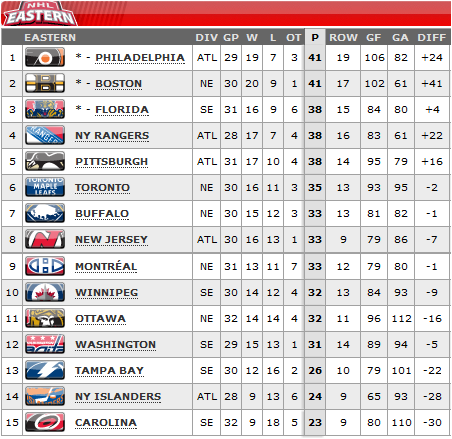 Your eyes aren't deceiving you. The Lightning are ahead of the Islanders by two points in the standings...but the Islanders have played two fewer games. The Bolts do have a better goal differential, but only just. They're currently one of the three worst teams in the Eastern Conference, and sadly, they've played like it so far.

One of my brothers-in-law is and Islanders fan, so the current standings bite deep. I've listened to him complain multiple times this season about how pitiful the Islanders are and how they're lucky to score two goals in a game; his snark and sarcasm have been well-trained by previous losing seasons. But how can I give him grief when the Bolts are arguably playing just as bad? I can't even snark myself; it's just too depressing.

If there's good news, it's that the Bolts haven't dug themselves into a hopeless hole...yet. There is still a long time to go in the season and they're only seven points behind the 7th and 8th place teams in the league. There's also the argument that the Bolts have been unlucky so far this year, and their luck on goals allowed should balance out going forward.

Of course, the Lightning shouldn't count on luck alone saving them; acquiring a top defenseman or banning Dwayne Roloson from the net would go a long way toward improving their defense. Allowing the third most goals in the Conference is a sure way to guarantee yourself a spot in the lower half of the league.