With the Atlanta Thrashers moving to Winnipeg before the 2011-2012 season, everyone knew that some sort of NHL realignment was coming. Due to the geography of NHL franchises, though, no potential solution was going to be perfect; there was always going to be one or two teams that got hung out to dry by the changes, and fans everywhere were crossing their fingers that it wouldn’t be them.

So when the official NHL realignment plan got announced last night, it was easy to see who got worked over: the Tampa Bay Lightning and Florida Panthers. 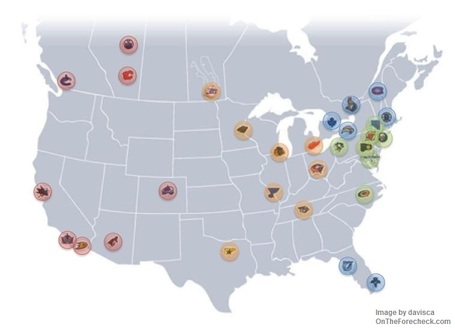 Map created by davisca at On The Forecheck.

To make matters worse, few other teams have anywhere near that sort of travel under the new system. Eleven teams in all of the NHL have an average travel distance over 750 miles, but only three of them — the Bolts, Cats, and Oilers — have average distances over 900 miles.

That’s not to say that this new system won’t offer the Lightning and Panthers any benefits. The Northeast teams always draw well, so the Bolts and Cats will be guaranteed to fill the house (or at least come close) during their home conference games. This realignment also maintains the regional rivalry between the two Florida franchises, and there’s the potential for a rivalry to develop against Montreal or Boston.

The hard truth is that the two Florida franchises were going to be out of place no matter where they ended up. There aren’t enough hockey teams in the Southeast to create a logical conference, and this scenario seems like the best of a variety of imperfect solutions.

Still, I don’t envy the Lightning or Panthers all those plane trips. At least they’ll be able to rack up a number of frequent flyer miles, right?

Have a reaction to this realignment news and want to chime in? Join the discussion at SB Nation’s team blogs: Raw Charge (Bolts) and Litter Box Cats (Panthers).