The Rays are one classy organization. Not only did Joe Maddon have the Rays wear Lightning apparel on roadtrips while the Bolts were in the playofffs, today the Rays took out an ad in the St. Petersburg Times (hat tip, Marc Topkin): 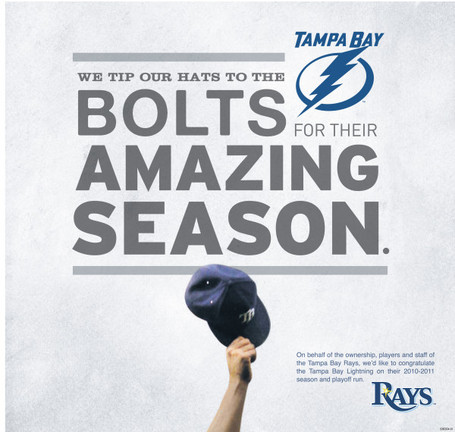 As a fan of both the Bolts and Rays, this sort of interaction is really heartening to see. As I've discussed with people on Twitter before, it feels like we've entered a golden age in Tampa Bay sports; the Bolts, Bucs, and Rays all have young stars, impressive coaches, smart front offices, and competitive teams. There's so much to like about all the Tampa Bay teams, and it only makes it even better to see the franchises supporting one another.

Now the only question is if the Lightning will return the favor to the Rays at some point. After all, owner Jeff Vinik is a minority owner in the Red Sox...