Steven Stamkos Rings In The New Year With Hat Trick

The Bolts have been blistering hot recently, all thanks to one player: Steven Stamkos.

Share All sharing options for: Steven Stamkos Rings In The New Year With Hat Trick

After starting the season on a skid, the Tampa Bay Lightning are white hot at the moment. They rolled over the Carolina Hurricanes last night 5-2, winning their third game in a row for the first time since early November, and they have accumulated 11 points in their previous 7 games. They've done this despite having their backup goalie, Mathieu Garon, pressed into service as their primary starter, and despite missing key members of their team to injuries: Nate Thompson, Ryan Shannon, and most recently Victor Hedman.

For the first time in a long while, the Lightning are looking like they may be able to push themselves back into the playoff race. And if they do, they will have one player to thank for their surge: Steven Stamkos.

Ever since Martin St. Louis first went down with his eye injury, Stamkos has been carrying the Bolts on his back. In the 10 games since St. Louis' injury, the Bolts have gone 6-3-1 and scored a total of 33 goals. Of those 33 goals, Stamkos has had a hand in 13 of them -- he has 10 goals and 3 assists over that stretch. He's scored on an absurd 31% of his shots, and he capped this hot streak with a hat trick in last night's game against the Hurricanes, his second of the season and fifth overall in his NHL career:

There are few words that adequately capture Stammer's spectacularness. For all the praise that Alex Ovechkin received when he burst into the league, it's worth noting that Stamkos has arguably been even better than Ovechkin through this stage of his career: 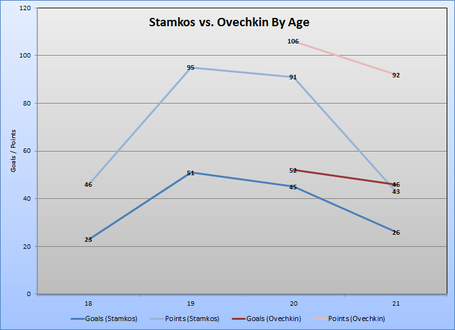 Ovechkin started off his career faster, but you can't forget how early Stamkos started his NHL career. He was a rookie at 18 years old, and he led the league in scoring in only his second full season. His 20-year-old season was a slight drop off for him from the previous year, but he was still nearly as good as Ovechkin was as a 21-year-old. And this season, at 21 years old, Stamkos is on pace to set a career high in both goals and points. It's unlikely that he stays this hot all season -- his shot percentage this season (20.3%) is a good deal higher than his career average (16.5%) -- but one thing is for certain: Stamkos has a case for the title of best player in the NHL.

Stamkos is taking his game to a new level this season, and he's keeping the Lightning's season afloat almost single-handedly. The Bolts have him under contract for 4 seasons after this one, taking him through his age 25 season, and I bet GM Steve Yzerman wished he had him locked up for even longer. Much like Martin St. Louis before him, Stammer is a franchise player if I ever saw one.